Christopher Bradley, writer, photographer, film producer and expert on the Middle East and North Africa took us on a very interesting journey from the origins of St Nicholas through to the present day’s Father Christmas, amply illustrated with photos of art and architecture of the times.

Born over 1700 years ago in 270 AD to a wealthy family of Greek Christians, Nicholas lived all his life in Myra, a vibrant sea port on the Mediterranean, where he performed many good deeds, including giving away all his personal wealth to the poor. During the reign of Emperor Diocletian, he was persecuted and thrown into prison. With the arrival of Constantin the Great who adopted the Christian religion, Nicholas was made a Bishop and continued to do many good works. He came to be revered as the patron saint of seafarers and children after he miraculously saved three sailors from a storm and three small boys who had supposedly been butchered.  He was canonized in 343 AD and his remains were eventually buried in the Church of St Nicholas in Myra where his tomb became a site of pilgrimage.

A few hundred years later, taking advantage of the wars between the Greeks and the Turks and fearful that they would no longer be able to visit the tomb of St Nicholas, Venetians sailors set sail to retrieve his bones. However, the sailors of Bari had the same idea and they arrived at the tomb first, taking away the larger pieces of the skeleton. These they returned to Bari where they placed them in the Basilica St Nicola and have celebrated their arrival every year since. Particularly as St Nicholas’ bones seemed to leak a liquid called “manna” – hence the expression “manna from heaven”! The Venetians arrived too late, but managed to retrieve some of the smaller bones which they returned to the Church of San Nicolo in the Lido.

The Dutch, being deeply devoted Christians and great seafarers introduced St Nicholas to the New World (USA) as “Sinterclass” where he slowly morphed into “Santa Claus” over the next few centuries through the imagination of such creative American writers’ as Washington Irving and Clement Moor of “T’was the Night Before Christmas” fame. Santa Claus was even used by Coca Cola in an advertising campaign in 1931! 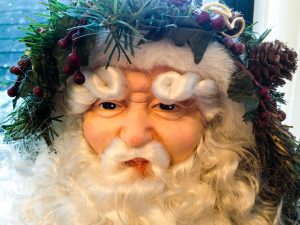 In Europe, through influences from Northern Europe’s “Odin” and the British Reformation’s “Green Man”, St Nicholas also transformed. His gifting of presents was moved from December 6th to December 25th and in Britain, during the Victorian period, he became famous through Charles Dicken’s “A Christmas Carol”. So that finally we have the “Father Christmas” that we know today, which has little relevance to any religious connection.