William Blake – poet, painter and printmaker of the late 18thC – was the subject of the exhibition at Tate Britain that we visited, with an informative introductory lecture from one of Tate’s experts.  Born in 1757, the son of a shopkeeper in Soho, Blake wanted to be an artist from an early age and spent 7 years from 1772 training as an apprentice engraver.  He then enrolled as a student at the Royal Academy where the emphasis was on imitating the great art of the past.  Blake later rejected the rigid ideas of this teaching and identified more with the ‘Gothic’ artists of the medieval past. 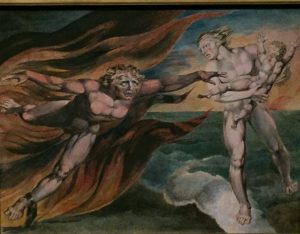 Engraving provided him with an income throughout his life.  Around 1788 he invented a new form of printmaking, ‘relief etching’, which involved painting with acid-resistant material directly onto copper plate and then repainting with ink everything in relief.  This enabled him to add text to his prints by ‘mirror-writing’ and he created a succession of visionary books exploring the important issues of the day – revolution, sexual freedom and the slave trade.  Such a painstaking process meant that production was restricted and few people saw these illuminated books. 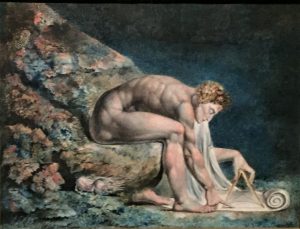 Drawing was fundamental for Blake but his paintings, influenced by his own strong religious beliefs and including characters from history together with his own  imaginary mythological creatures were not generally well received.  He claimed to have visions and one critic of the time described him as ‘an unfortunate lunatic’.  But he had a number of wealthy patrons who admired his originality and bought many of his works.  This was a time of radical thought, war and global unrest.  The British Empire was expanding (apart from the loss of America).  New ideas about social justice developed alongside rapid industrialisation and Blake created imaginative images and texts that resonated with this changing world. 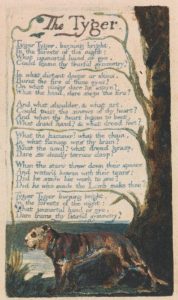 Ten years prior to his death in 1827 he was introduced to a group of artists known as ‘The Ancients’ and buoyed by their material and moral support produced his most extraordinary works.  These included a series of large and vivid watercolours illustrating Dante’s ‘Divine Comedy’ and engravings of the biblical ‘Book of Job’.  His last and most ambitious illuminated  book ‘Jerusalem’ was completed in 1820.

There are some charming images and still well-loved poetry and it is notable that Blake’s work has provided inspiration to a wide range of people down the years, but much of his work is unfathomable, and even disturbing, especially to our modern eyes. Still, it was quite refreshing not to be instructed on how to interpret it, which the Tate wisely refrained from doing (or couldn’t attempt!).

However, even though we may not have greatly liked Blake’s work, it was certainly educational and we all enjoyed visiting the Tate again and thought it most appropriate that on a day of very turbulent weather we were greeted on the entrance steps by an art installation featuring shredded white material to portray flooding water alongside the audio effects of a storm, to highlight global warming.  And the water level in the Thames was very high indeed! 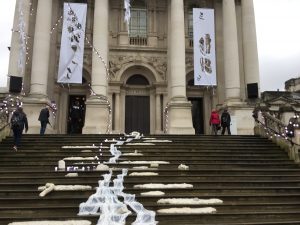