Thirty seven members of the Society boarded the coach in Grayshott first to visit Pitzhanger Manor in Ealing. Built by the famous neo-classical architect Sir John Soane between 1800 – 1804 as his country home in Walpole Park, Ealing, it now nestles in this busy London suburb. Soane intended it as his family country villa for entertaining guests and to showcase his skills as an architect and his collection of art and antiquities. Between 2016-2019 it received a £12M major restoration thanks to the Pitzhanger Manor Trust, Ealing Council and the Heritage Lottery Fund, with the aim of restoring Sir John Soane’s original architectural vision of the house. This has been beautifully achieved, displaying many of Soane’s neo-classical features of Roman columns, canopied and quartered dome ceilings, inset mirrors, wooden paneling and even marbled paint work in the entrance hall to imitate real marble, which was too cold a material for chilly England. 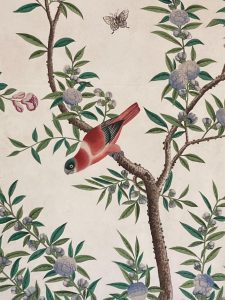 Of particular note are the Eating Room’s tall windows and the Breakfast room with its superb, hand painted in situ, wallpaper.

A pleasant, contemporary café restaurant in Soane’s kitchen garden meant that members could refresh themselves with a coffee and even lunch as well as visit the newly refurbished Art Gallery, currently exhibiting the work of Rana Begum.

After lunch, the next stop was to Osterley House and Park, an impressive neo-classical country mansion surrounded by gardens, park and farmlands in Hounslow, currently owned by the National Trust. Originally built by Sir Thomas Gresham in the 1570s, it was transformed in the 1760s by Robert Adam to be the “palace of palaces” for the Childs family, having been purchased in 1713 by the wealthy banker Sir Thomas Childs. The neo-classical sequence of rooms designed by Adams are among his most

notable, characterized by beautiful plaster work and varied coordinated colour schemes – especially the entrance hall, long gallery and Etruscan room, while the Tapestry room was so expensive that Robert Childs tore up the bill so that no one would know just how much it cost!