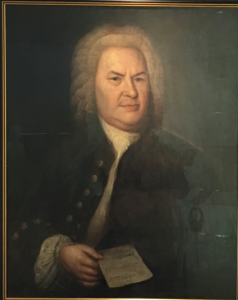 Demonstrating his deep knowledge and understanding of the music by playing and singing excerpts to illustrate his points, Peter showed why for many Bach is considered the greatest of all composers.

Born in 1685 in Eisenbach the same year as Scarlatti and Handel; all three were key composers of the Baroque period which came to an end with Bach’s death in 1750. Bach wrote a range of music, from preludes, fugues and sinfonia, to masses, cantatas and canons, with depth and mastery. These were remarkably cosmopolitan given that he never travelled outside Germany but remained all his life in the Tübingen region of the South East.  At 18 he was the organist at the new church in Arnstadt, where he wrote his choral preludes. In 1723 he went to Leipzig as Cantor at St Thomas’ school, where he had to provide music for four churches and so wrote five complete Cantata cycles totaling 52, one for each Sunday of the year and more for festival days (which he wisely repeated from 1730s onwards)

Baroque music is characterized by its sense of awe, drama and emotion and Peter opened our eyes to what is really going on in the music. How Bach’s harmonic technicalities and dissonances in the St Matthew Passion, for example, reflect the tragedy of Christ’s crucifixion with emotional intensity and how the base line fuses with the harmony of the middle line and the melody of the top line. Amusingly, Bach secretly embedded his name in much of his music, especially the Canon Triplex, as he was deeply conscious of his place in the world and left a wonderful amount of music as his testament.