Once described by the French author Albert Camus as 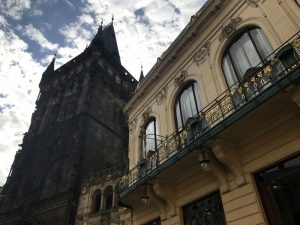 “Prague, the city full of gold genius” Gavin Plumley, well known writer, author, broadcaster and lecturer, gave a stimulating and well received talk on the making of Prague, through it’s cultural history, from its earliest days to the signing of the Declaration of Independence on the 18th October 1918 and the creation of Czechoslovakia.

Emphasising that the development of the Czech identity came not only through it’s political, religious, industrial and economic history but also through its artistic, linguistic and musical heritage, Gavin showed how despite 300 years of Hapsburg rule and the preponderance of the German language over Czech, the Bohemian and Moravian people maintained the desire for their own national identity which came to a head in the 19th Century.

The migration of workers from the countryside into the cities during the political and industrial revolution greatly increased the spread of the Czech language and Czech desire to impose their own identity through their love of nature, language and culture. Showing images of paintings, posters, music and books, Gavin described how the politician and historian Frantisek Palacky (1798-1876) who grew up only speaking German, published “The History of the Czech Nation of Bohemia and Moravia” in 1870 after he himself had to learn Czech. He showed how Jakub Schikaneder depicted loneliness, isolation and sadness in his paintings from his studio, while the Impressionist artists Ludek Marold, Julius Marak and Otakar Lebeda embraced painting the countryside “in situ”. How Czech writers published such books as Babicka by Nemcova Bozena and “Tales of the Czech People” by K.T Erben in Czech, not in German.

In the 1880’s the Czech National Theatre opened and staged “The Brandenburgers of Bohemia” and “The Bartered Bride” by Bedrich Smetana, in which the energetic and lively music for the folk dances thrilled audiences so much that it came to define Czech music. Antonin Dvorak too, found his own way of imbuing his music with the energy and patriotism of Bohemia. Finally, at the beginning of the 20th Century, Alphonse Mucha, a Bohemian Art Nouveau artist working in Paris who designed the famous poster of Sarah Bernhardt, returned to his homeland where he celebrated Czech history and its independence through his “Slav Epic”, a celebration in twenty canvases of the history of Prague and the magical land of Czechoslovakia.