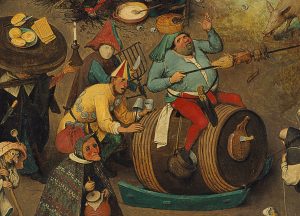 The Arts Society was very lucky to have artist, designer and lecturer Richard Whincop to step in with his lecture “Pomp, and Feast, and Revelry :The Medieval Year in Art”. This was to replace Dr Paul Roberts’ talk on Pompeii, who was unwell.

Life was tough in Medieval Europe, with a lot of hard work and little entertainment for a mainly illiterate general population. However, the year was divided up into a number of entertaining feasts, religious festivals and celebrations which engaged every level of society and brought everyone together at regular intervals. Illustrating his talk with a colourful array of period art and rare medieval manuscripts, Richard took us through the Medieval Year from Halloween to the late summer Harvest festival.

Famous artists of the time, including Dürer and Botticelli  became involved in set designs for Miracle Plays, “Tableaux Vivants” (where actors stand still to depict the scene) and Religious Processions depicting classical and biblical scenes. Created mainly for these impermanent celebrations, Richard gave us examples of  how some of these designs crossed over into the work of artists as in Denis Van Alsloot’s painting commemorating “The Omergang Procession in Brussels in 1615” with its elaborate floats. Pieter Bruegel the Elder’s “Flight between Carnival and Lent” gives a marvellous depiction of the contrast between the sombre clothes and food of Lent after the celebrations of Carnival (photo above); while the woodcut by Guyot Marchant of “La Dance Macabre” (1485) is an amusing depiction of Halloween where people would dress up in just such outlandish skeleton costumes. The nobility were no less enthusiastic about these joyous celebrations as can be seen in Benozzo Gozzoli’s elaborate “Procession of the Magi” (1459-61) at the Medici Palace in which Lorenzo de Medici dressed up as the Magi. Full of colour and contrast, this was a wonderfully informative, entertaining and occasionally humorous lecture.