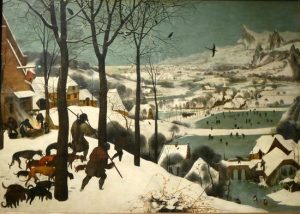 Who was Pieter Bruegel the Elder? Where was he born? In what year?

We don’t know the exact answer to these questions according to Clare Ford-Wille, Art Historian and lecturer, who gave a fascinating account of Bruegel’s life and art. Research has put Bruegel’s birth between 1525 – 1530 at Breda in the Netherlands.

What we do know is that he became one of the foremost painters of his day. Called the “Peasant Painter” because he painted the ordinary people; Bruegel appears to have trained with Pieter Coeke van Aelst in Antwerp before setting off on a trip to Italy in 1552/3, returning via the Alps and France in 1556 which influenced much of his future art work as he became an expert in topographic perspective.

Bruegel first became known for his drawings which were worked into etchings and engravings and published by Hieronymus Cock in Antwerp who initially passed them off as the work of Hieronymus Bosch (1450-1516), being the more famous artist and a great influence on Bruegel. However, Bruegel’s  series of engravings on “Sloth” (1557), the “Seven Deadly Sins” (1558), and the “Seven Virtues” soon sealed his reputation as a talented artist in his own right with his own personal view of human folly and depravity.

Bruegel further developed his theme of a foolish and sinful world in his paintings in “The Combat between Lent and Carnival” (1559), the “Netherlandish Proverbs”(1559) which described 126 proverbs, and the horridness of children  in “Children’s Games” (1559/60). His depiction  of ordinary people in activity painted in bright colours with a clear, amusing  development of his theme fascinated people. Clare honed in on little details in each painting that brought to light the sheer creativity and vision of the message that the artist wished to convey – which was very pertinent at a time of much political and religious upheaval in the Netherlands. She showed us via his many works how Bruegel’s reputation continued to grow as he  produced yet more intense, intriguing and expertly crafted paintings. He commented on the terrible wars and destruction in the world at that time with “the Triumph of Death” (1562) which showed how his style changed and became darker. In “Dulle Griet  (Mad Margaret) (1562) he  saluted the strong women leaders of the time:  Elizabeth I of England and Catherine de Medici in Spain. He produced beautiful miniatures measuring just 35x55cm in remarkable detail including in “The Adoration of the King in the Snow”. We have no idea of his religious beliefs, but from some of his many religious paintings, we surmise that he felt it was dangerous to be too dogmatic, as seen in “The Tower of Babel” (1563).

Peiter Bruegel married the daughter of his old boss Hieronymus Cock in 1562, and after siring two sons, died in 1569 at the age of 43. Both boys became artists, but were not in the same league as their father. Pieter the Younger (1564-1638), Clare described as little more than a “pasticher”; while Jan (1568-1625) did gain a reputation for his flower and landscape paintings. A fascinating lecture, delivered without notes, showing Clare’s wealth of knowledge on this famous and influential artist.