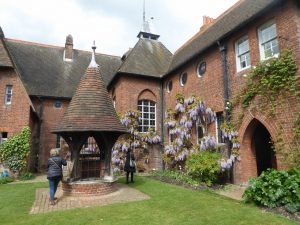 This day out was something of a South London odyssey as William Morris’s Red House, originally in the middle of tranquil fields, is now in the middle of a suburban housing estate in Bexleyheath, while our onward journey to Dulwich required us to brave the vagaries of London’s South Circular road. But it was well worth the trip, as both venues were hugely enjoyable – and the weather was good.

Philip Webb designed the Red House and its lovely gardens for Morris in the Arts and Crafts tradition. There were delightful touches everywhere.  Outside the mellow red brick, steep rooflines, windows varying from sashes and leaded lights to circular portholes and the garden well with its tiled roof, created beauty and interest, enhanced by the wisteria in full flower. Inside, we were entranced by the specially designed fireplaces, painted cabinets, walls and ceilings, stained glass and even signatures etched in the glass panelled doors in the hall. Sadly, Morris found it too expensive to live in the house and moved after only five years and before plans for the full furnishing of the house could be completed. What he and Webb achieved is still a delightful demonstration of what they inscribed over one of the fireplaces – Ars long, vita brevis.

Our next stop was to get some lunch at nearby Danson Stables. Standing in the middle of the Danson Park, it was originally the stables for the nearby Georgian mansion, Danson House. Now it is a pub and they gave us a splendid buffet sandwich lunch of giant proportions – indeed we couldn’t get through more than about half of what they served up (though bigger plates might have helped)!

On we went to Dulwich Picture Gallery, who were celebrating the 20th anniversary of their opening to the public, the first purpose built public art gallery in the world. Our visit followed up a talk from Helen Hillyard, Assistant Curator, in January. The gallery was designed by Sir John Soane who pioneered the use of roof lanterns to provide diffuse natural light. The gallery also incorporates a mausoleum for the founders of the collection, Noel Bourgeois and Margaret Desenfans.

Two excellent guides introduced us to the highlights of the permanent exhibition, the quality of which was a real eye- opener, with a wide range of wonderful old masters. Dulwich is also known for its special temporary exhibitions and went on to enjoy works by Vanessa Bell, whose home at Charleston Farmhouse in Sussex we visited last year.

Photographs can be found in the Photo Gallery.