Adam Aaronson has been at the forefront of contemporary glass artistry for some 40 years. We will have an afternoon talk and glass blowing demonstration at his studio at West Horsley. Preceded by optional pub lunch at The Queen’s Head at East Clandon.

Travel by car with lifts available. 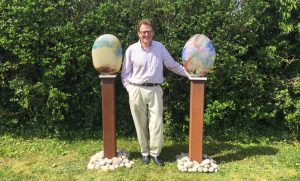 In his early career Adam helped to develop the family’s London business, in Highgate and then Piccadilly, into the first gallery entirely devoted to British Studio Glass. Then in1986 he started to make his own glass and opened his first glassblowing studio in Clerkenwell. He later settled in Earls Court where for 20 years he made and exhibited glass art, which became sought after around the world. In 2013 he moved his studio to a former agricultural building in West Horsley where he works with a small team. He also runs glassblowing courses at weekends.

Adam specialises in free blown glass. He describes his coloured patinas as drawing on painterly techniques and predominately inspired by a love of nature, especially the play of light on water and the landscape. His work takes significant inspiration from painters such as Turner, Whistler and Monet.

He now produces a great variety of work, from smaller traditional pieces to large scale glass sculptures, often working with interior designers and architects. Members who went to Westminster last year may remember the New Dawn artwork in St Stephen’s Hall installed in 2016 to commemorate the campaign for women’s right to vote.  Designed by Mary Branson, the window contains 168 unique hand blown glass scrolls produced by Adam and his team. 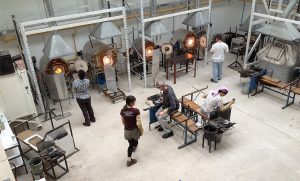