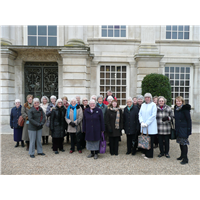 As the numbers the School can accomodate on group visits are limited to 24, six members kindly drove to Hampton Court Palace and gave lifts to the rest of our group. Hence we turned in, rather grandly, through the imposing front gates and, after fortifying ourselves against the February cold at the Tiltyard Cafe, we strolled through the gardens to meet our hosts at the School.

Founded in 1872, the school is dedicated to teaching, practising and promoting the art of hand embroidery. Occupying rooms in the magnificent East Front it runs courses at all levels from beginners to degree level. It maintains a major colection of the finest examples of embroidery, conserves and restores historical work and accepts commisssions for major new work.

Following an informative, well-illustrated talk, we were able to renew our acquaintance with Chief Executive, Dr Susan Kay-Williams, who had whetted our enthusiasm at her lecture to our society in 2014. She showed us some of the most original and exquisite pieces from the School’s Handling Collection.

Then we split into two groups to tour the School. As with the Handling Collection, many of the pieces on show in ther ‘Inspired by the Garden’ Exhibition are truly breathtaking. Everyone found it a wonderful opportunity to see so much creativity, skill and beauty. In a workshop we saw the most intricate pieces being made or repaired, sometimes using thread almost as fine as gossamer.

At one point we noticed a figure, looking strangely like Cardinal Wolsey, lurking in the cloisters. We discovered his reincarnation and that of various other Tudor personalities was part of the celebrations, to mark the 500th Anniversary of the founding of Hampton Court Palace, due to take place the following day. After lunch, while visiting the rest of the Palace, several of our group saw these other characters as well as Lucy Worsley, Chief Curator of Historic Royal Palaces, preparing for her role in the TV Programme to mark the anniversary.

We had a further unexpected bonus on our visit. The floorboards of one of the school’s main rooms had been taken up for repair and revealed the lost foundations of royal apartments, once occupied by Anne Boleyn and Jane Seymour. Consequently, the school had had to decamp from this room and set up their main exhibition elsewhere. We appreciated the trouble taken to facilitate our visit and the opportunity to see the excavations.

Certainly a fascinating and rewarding day.