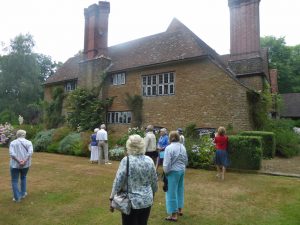 As a follow up to April’s talk on Gertrude Jekyll and Edwin Lutyens, we arranged a visit to see the gardens at Gertude Jekyll’s home near Godalming – Munstead Wood. This was one of the first of over 100 collaborations by what became the famous partnership of Jekyll and Lutyens.  The gardens in fact pre-date the house by some 13 years.  In 1883 Jekyll was living with her mother across the lane in Munstead House, when she acquired the wooded land that became Munstead Wood and set about creating a garden. In 1889 she met Lutyens, who first designed for her The Hut, set in the garden and which Jekyll used as her home and workshop until the main house was finished in 1897.  Jekyll moved in and lived in the house until she died in 1932.

It wasn’t the best of weather – gloomy clouds and occasional drizzle – but it didn’t prevent us enjoying the extensive gardens, which are now divided between Munstead Wood and the neighbouring property.  Annabel, Head Gardener at Munstead Wood, and Gail, who owns the neighbouring house, kindly showed us round and impressed us with their knowledge and enthusiasm.

The main gardens, set against the backdrop of Lutyen’s lovely house in Bargate stone, offer considerable variety with different areas coming into their own at different seasons (and offering scope for another visit perhaps in the Spring!). Jekyll’s creativity was much in evidence from the hanging curtains of clematis outside the house to the round box bushes in square stone ’ boxes’ and the wooded walks with varied underplanting. The main herbaceous border was in full flower and showed off Jekyll’s famous talent for mixing textures, shapes and colours. Moving on to Gail’s house next door, we were moved by the profusion of planting in a wonderful succession of ‘rooms’ based on different months of the year or colour themes, such as blue and grey. The density of planting was reminiscent of Great Dixter that we had visited in June.

The house is in private ownership and not open for viewing. But we did see two other examples of Lutyens’ work: we learnt that his design for the Cenotaph in London had its origins in an idea he had at Munstead Wood, where part of the wood and stone seat, which became known as ‘the cenotaph’, can still be seen in the garden; and walking down to Busbridge church afterwards we saw Lutyens’ design for the tomb of Jekyll, her brother and his wife and his rood screen. A bonus was to see the lovely stained glass windows by Burne Jones and William Morris’s workshop.

We had much to talk about at our pub Lunch at The White Horse at Hascombe, which round off an enjoyable morning.

For more photos of the visit see the photo galleries.