At our autumn Special Interest Day, Christopher Bradley gave us a fascinating insight into the greatest trade route the world has ever known. He explained that from before the C1st BC, this route was in continuous use for 1500 years and there was never a single silk road. The actual name was only first used in 1877 as people became fascinated by how important it had been and yet it had died out. The route was subject to climate, local politics and the natural terrain. There was even a parallel sea route. 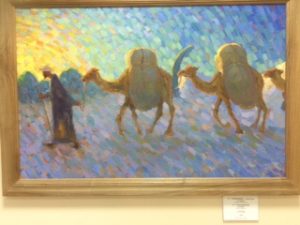 46% of the silk Route lay in China. Around 4,500 years ago the silk industry had started in China, home to the White Mulberry Tree, essential to silk production. At one time Persia (Iran) had 74% of the world’s population under its rule. Alexander the Great brought the Greek language, Greek currency and Greek culture to China as well as stability to the western end of the trade route. China’s first emperor sought to secure the country not just by constructing the Great Wall but by introducing cavalry appropriate horses from further west. In exchange ceramics, spices and silk were traded for such horses and also gold, ivory, pearls and metals. Extending their empire, the Romans saw the silk banners of an enemy and traced the source of that silk. The growth of the Islamic and then the Mongol Empires helped maintain the stability essential to such a vast route.

Throughout its history the Silk Route relied on strong government. Consequently the demise of such empires was reflected in the decline of the route. Camels did carry the goods across deserts but then different terrain and different traders required different animals. Soldiers would accompany the merchants who would stop overnight at Caravanserais every 25/26 miles. This gave not just an opportunity to eat and rest but also to trade in goods, knowledge and ideas. The Caravanserais gave overnight protection to the merchants and importantly to the precious goods to be traded. In return merchants paid 0.25% of their goods’ value. Christopher had given us a map that proved essential in following the various sections of the route and locating the route and its key cities. 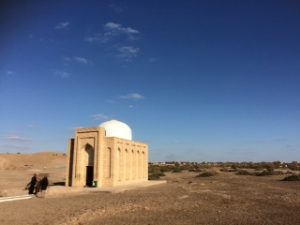 The Silk Road helped the spread of different languages, different technologies, different religions such as Buddhism, different styles of art and architecture, different languages and cultures. Over the last 200 years, explorers, archaeologists and researchers have followed the Silk Road in search of different outcomes. In the last 120 years there has been a revival of some cities on the Silk Road such as Tashkent. Railways offer a ‘New Silk Road’. In 2013 the Chinese president introduced a ‘Belt and Road Initiative’ for an overland rail and maritime route from China into Europe. As Christopher’s final lecture drew to a close, we realized just how absorbed we had been in his superbly informed, digital presentation of such an enthralling topic.