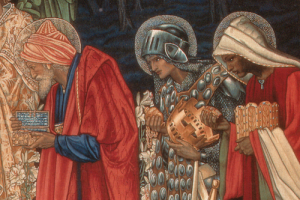 The term ‘Magi’ refers to the Zoroastrian priest-sages, anonymous wise men who were specialists in medicine, religion and astronomy, who travelled from ‘The East’ – variously identified as any country from Arabia to Persia. Tradition has placed the number of Magi at three, relating to gold, frankincense, and myrrh, but earlier versions has the number between two and thirty. It is one of the most famous legends used by storytellers and artists alike, with Melchior, Caspar and Balthasar becoming universal symbols and representations, such as the three ages and races of man.

We investigate the sources for the stories of their journey and the symbolism of their gifts. One of the most popular religious subjects for artists is the Adoration of the Magi and we look at some early English examples. The story of Empress Helena and her search for sacred relics is told in the wonderful Arezzo frescoes of Piero della Francesca. Helena’s attempts to find traces of the Magi led her envoys around the Middle East, taking us ona journey from Constantinople to Milan and Cologne.