Nigel Bates, who is a professional percussionist, writer and speaker, and former Musical Administrator of the Royal Ballet, gave a fascinating and informative lecture on the ballet The Nutcracker by Pyotr Ilyich Tchaikovsky which was first performed at the Mariinsky Theatre in St Petersburg in December 1892.

Originally commissioned and directed by Ivan Vsevolozhsky and choreographed by Marius Petipa, the ballet was not deemed a success, receiving such comments from the critics as “ The Nutcracker cannot even be called a ballet” and “A whole load of fine music wasted”. The director retired and Tchaikovsky died in 1893 but the music of The Nutcracker lived on in the Nutcracker Suites until it had its first British ballet Premiere in 1934 at Sadler’s Wells, directed by Ninette de Valois. 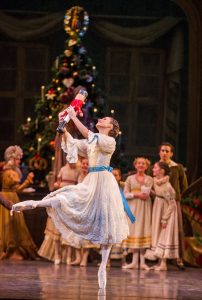 Since then it has become a firm favourite as a Christmas time show worldwide and its sheer popularity around December can ensure a Theatre’s income for a whole year.

Nigel based his lecture on the 1984 performance directed by Sir Peter Wright at the Royal Opera House, where Nigel was percussionist. Showing film clips from the stage performance, he spoke of the difficulties of staging such a show, how the stage scenery “grows” as the heroine shrinks to the size of the toy Nutcracker soldier and he and the other toys come alive. He tells amusingly how he, as the percussionist, had to run up on stage from the orchestra pit to strike the 12 chimes of midnight and run down again in time for his next percussion part.

He evokes Tchaikovsky’s musical genius as he develops a simple tune in the battle scene and grows it, bringing in the instruments of the large orchestra (80-90 musicians), to a final crescendo with the trumpets, only to drop back down to the gentle music of the harps as they arrive in the Forest of Enchanted Angels at the end of Act One.

To everyone’s delight Nigel even played the tambourine to the musical score of the Russian Dance in the Kingdom of Sweets (Act 2) showing how exact his timing had to be.

There have been thousands of Nutcracker performances all over the world, and because the music is out of copyright, it can be used everywhere. Also Petipa never recorded his ballet choreography and so to this day the Nutcracker ballet can be reinterpreted by each new choreographer – hence Matthew Bourne’s version.