Caroline Knight began by reminding us that before the 1753 Act of Parliament established the British Museum, there was no public collection of antiquities. Access to private collections was limited and so a tradition developed, in the C17th and C18th, for young men of sufficient wealth to travel to Europe to enhance their education and experience the Classical and Renaissance legacy. Young women of wealth sometimes undertook the Grand Tour. Scots tended to travel to Northern Europe while English and Irish young men would travel from London to Paris and then to Venice, Florence and Rome or less commonly via the Loire to Florence. It could take five days to cross The Alps and Italy’s array of states and currencies made travel slow and expensive, with baggage searched and servants changing at the various borders. 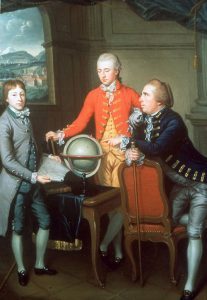 In view of the lengthy stays the young men would usually take lodgings. They wanted to see gardens, villas, palaces as well as paintings but especially the Old Masters and sculpture. Guides were essential for the main sites but the ability to read and understand Latin was taken for granted. The guides were often dealers in antiquities Chaperones usually accompanied the young men and often they were the family chaplain. Perhaps this was to avoid excesses or the allure of Roman Catholicism. Imagine the contrast seen in Florence to Civil War England of the mid C16th. In the C17th Catholic family members were expected to call and pay respects at the Stuart Court in Exile in Rome. Writers describe how this rite of passage might mean a young man escaped the ‘dangerous fondness of his mother’ or return less conceited. 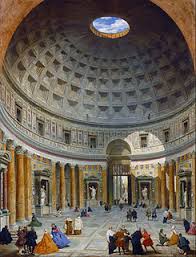 and Countess of Exeter went together four times in the1680’s and as a resultchanged Tudor Burghley radically. Thomas Coke spent six years abroad before returning to Holkham. He kept detailed accounts of his travels and in his last year spent huge amounts amassing treasures. Winters in Venice might be spent at concerts, masked balls, fencing, having a portrait painted or music lessons. Some would be interested in discovering how other countries were governed or, like lord Burlington, have an interest in architecture.  Villa d’Este’s cascades being the inspiration for ‘Burlington’s Piddle’ at Chiswick!

In the C18ththere was less disapproval of copies than today. If unable to afford the real thing or it was unavailable then a plaster cast would suffice. Portraiture took second place to biblical and mythical painting. The French Revolution and Napoleon’s armies crossing Europe marked the end of the Republic of Venice. His relatives ruled Florence, Rome and Naples. Travel became impossible for a whole generation and afterwards, with better roads and then railways, the idea of long tours gave way to short stays and the rise of hotels. Modern tourism was emerging.