The first Virtual Tour of the season was both fascinating and extremely moving. Lecturer and Blue Badge Guide Ruth Polling gave an illuminating and poignant account of the Final Journey of the Unknown Warrior and tied together many key aspects of Remembrance in Britain today along the way. 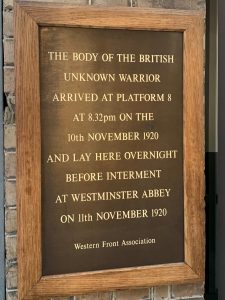 The funeral procession itself started at Victoria Station on the 11th November 1920 and thousands of people lined the route to Westminster Abbey to see their warrior. The funeral was really for all those men who had died in the war. Half of those killed on the battlefield during WWI were unidentified and had no known graves. The unknown warrior could have been anyone. Most people would have known at least someone who had been killed and they had been denied the ritual of a funeral and, for many, a grave to visit. The funeral of the Unknown Warrior was a symbolic way of saying ‘goodbye’ to a loved one and helped in the processing of a terrible loss.

Over the next 10 years many ways to help process the collective grief of the public were developed including the two minute silence, the poppy, the Cenotaph and many war memorials and monuments. All of these customs came from the 1920s.

Though the unknown warrior was a private in the army, the funeral was that of a Field Marshall – the highest ranking officer in the regiment. There was a nineteen gun salute, a mass of marching bands and marching troops and thousands of people lined the entire route of the procession.

The King and Prime Minister had initially been uncertain of the idea of burying the Unknown Warrior in Westminster Abbey. The final decision was made on October 20th 1920 which left only three weeks to arrange the funeral.

Several unknown soldiers were disinterred from the battlefields and one body was selected to be the Unknown Warrior. The body was placed in a coffin of solid oak and shipped from Bordeaux to Dover. Over one thousand people stood in Dover to watch it arrive. From thence it went to Victoria Station. Subsequently a memorial has been built at the station along with many others along the route. 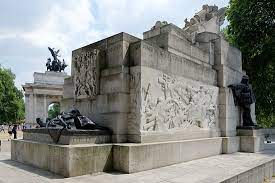 The idea of War memorials go back to ancient times but most of these were built to celebrate a victory or as a commemoration of the leader, for example Nelson’s Column and the Wellington Arch celebrate Nelson and Wellington respectively. In these there is no mention of the actual soldiers. By the time of WW1, attitudes had changed and at last soldiers began to be respected. Ruth talked about the Royal Artillery memorial, which was designed by the sculptor Charles Sargeant-Jagger and unveiled in October 1925, which not only included a statue of a dead soldier it also showed how hard the soldiers job was. It was built to commemorate them, not a victory.

Some of the monuments which are now on the route remind us of the losses of the soldiers from other parts of the British Empire involved in the conflict e.g. Australia, New Zealand, India etc. The Unknown Warrior was a British Empire Soldier and so people from all parts of the Empire mourned him too.

The route took us past Buckingham Palace. King George V adopted the idea of the two minute silence which has become an integral part of remembrance. There had been Peace Day celebrations which hadn’t struck the right note as they focused on victory. The King believed that people wanted to express their feelings, so on the eleventh hour of the eleventh day of the eleventh month we now have a two minute silence. When it was introduced not only were people silent – the trains, buses and transport stopped too. 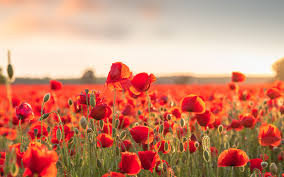 We also heard about the origins of the poppy. It was chosen because of the poppy’s ability to thrive on the battlefield of the Western front. It was inspired by the poem ‘In Flanders Field’ by John McCrae. This custom began in September 1920 and the money raised was used to find veterans’ houses and to help them find employment.

The Peace Day celebrations at the end of the war involved fireworks and other celebratory events. During the planning it was realised that people actually needed a way of mourning the soldiers who had died. A temporary wooden version of the Cenotaph monument was built and more people waited there than elsewhere in the procession in order to pay respects to the dead. Flowers were left for days and days. Consequentially the monument was made permanent. It was completed just prior to the funeral of the Unknown Warrior and was unveiled during the funeral procession.

The King followed the procession from the Cenotaph into Westminster Abbey. The majority of the congregation was made up of a thousand women, all of whom had lost a husband. One hundred of them had lost their husbands and all of their sons. When the coffin entered the Abbey it was very moving experience as people felt that the body inside the coffin could have been their own loved one. It was a wonderful way of honouring all of those who had lost their lives and had never been returned to their loved ones.

Many of those who attended this excellent Virtual Tour were extremely moved by it.