In November, writer, journalist and broadcaster Sarah Dunant gave the most interesting and exciting lecture on The Borgias: The Most Infamous Family in History? Sarah has worked  for many years as a cultural journalist in radio and television on such programmes as Kaleidoscope (BBC Radio 4), The Late Show (BBC2), and Night Waves (BBC Radio 3). She is also a renowned English writer having written thirteen novels, her last five being set in Renaissance Italy.

Sarah spoke about the election of Rodrigues Borgias as pope, probably corruptly, in 1492 and taking the name Alexander VI. He was one of the most powerful, corrupt and wealthy men in Europe, and was head of the most notorious dynasty during the 15th and early 16th Centuries. Alexander is considered one of the most controversial of the Renaissance popes, partly because he acknowledged fathering several children by his mistresses and used his position to advance his sons and daughters, mainly Cesare and Lucrezia. Cesare was extremely driven and at the age of 18 became a soldier. 13 year old Lucrezia was used as a pawn on a chessboard of power through marriage. 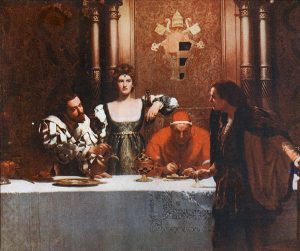 Having researched the Borgias extensively, Sarah has become a passionate advocate for greater historical accuracy. She likened some of the stories heard about the family to modern day fake news. Lucrezia has been painted as one of the most infamous women in history whereas by the time she was twenty three she had been married off three times, each time to advance her father’s power. The murder she is accused of was almost certainly engineered by him. When she died she was actually a much loved Countess.

Sarah also talked about Alexander VI as patron of some of the most wonderful art. Before Michelangelo, the Sistine Chapel in the Vatican City was rich in Renaissance art with the walls painted by several leading artists of the late 15th Century depicting stories of Moses and Jesus, and with tapestries to cover the lower part of the walls.

The lecture was enjoyed by well over a hundred people.