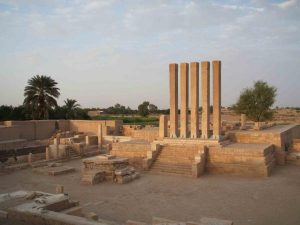 All those who came to Louise’s last lecture will remember how fascinating and entertaining she was and will be delighted to see she is returning.

Having been curator of Greek Bronze Age and Geometric Antiquities in the British Museum for thirteen years, she now works on international archaeological projects, principally in Ethiopia, Turkey and Albania. Her current archaeological site – in Tigray province, northeastern Ethiopia – is a temple, probably dedicated to a moon god and dating to the 5th Century BC – a time when Ethioia formed part of the kingdom of Sheba. Excavations there, in April and May 2015, have uncovered a rich cemetery which includes an extraordinary burial of a 2000 year old Ethiopian ‘Sleeping Beauty’.

This time she will detail her current archaeological project in northern Ethiopia which may yet solve the mystery of where the Queen of Sheba derived her fabulous wealth. The fame of the Queen has lasted across the many intervening centuries since she made her epic journey from her distant land to the court of King Solomon. That journey, with its camel caravan laden with gold and incense as gifts for the King of Jerusalem, was immortalised in the Bible’s Book of Kings. In this talk Louise looks at how she captured the imagination of greart artists, inspired archaeologists to go in search of her land – a search that has led to discoveries of grear temples, tombs and treasures.