At this month’s meeting Linda Smith gave us a fascinating insight into ‘20th Century Sculpture’. From unmade beds at one end of the spectrum to large lumps of marble at the other, she traced how development such as Cubism, Primitivism, Surrealism and Pop Art affected sculpture.

In Direct Carving the natural, intrinsic qualities of the material determined how the sculpture developed. No scaling up, preparatory drawings, machinery or assistants were involved. It was very popular among the avant-garde partly because carving was only taught in technical colleges. Valued by Gauguin, Primitivism had at its core an interest in the arts and culture of non-European non-industrial times and places. Cubism in sculpture was revolutionary. Previously sculptures were carved out of wood or stone or moulded out of clay, not built up or constructed. The different constituents in Picasso’s ‘Head of a Woman’ are irregular and meet at sharp angles. He and Braque started to produce collages, adding bits of the real world into sculptures. These were not traditional art material but all kinds of ‘objets trouvé’. Futurism looked to the future, embodied dynamism, youth and praised everything industrial. With ‘Rock Drill’, Epstein had a brief brush with Vorticism and its belief industry would make the world better but World War1 brought disillusion with what man could do with technology. As with traditional art, Duchamp’s ‘Fountain’ of 1917 was signed, dated and presented but he had not made that urinal. With the Ready Mades, ideas were more important than object, artist or materials. These works asked if something was art because it was in an art gallery or the artist said so. In extreme reaction to war, the anti-art movement, Dada, aimed to shake people out of complacency to look at things in different ways. As its name suggests the Return to Order movement had a more traditional desire to return to pre-war certainties. Beginning in Russia, Constructivism stressed spatial relationship but in ‘20’s Russia abstract art, seen as elitist and capitalist, disappeared. Surrealism, with its Freudian interest in the sub-conscious mind wanted to bring change but was seen as deeply subversive. With its juxtaposition of different objects Dali’s ‘Lobster Telephone’ sought to bring about chains of thought and the effect inanimate objects can have on us. 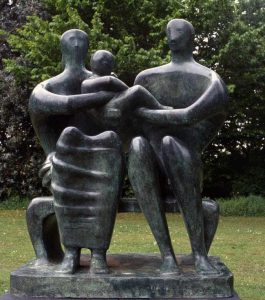 Hepworth and Moore exemplified polite, mainstream Modernism unlike Bacon while David Smith’s unique metal work welded pieces from found objects. The 60’s saw the return of outrageous art such as Manzoni’s ninety cans of ‘Artist’s Shit’ while Pop Art and Minimalism removed the hand of the artist and what you saw was what you got! Warhol, in reaction against abstract expressionist painting, used images of well-known objects such as his Brillo Box plywood sculptures while Flavin used a variety of industrial materials, organized according to geometrical principles and mathematical rules.

In the 80’s, Jeff Koons brought a focus on banal objects that may be seen as kitsch or compelling in their originality. His ‘Michael Jackson and Bubbles’ while not aspiring to beauty and aesthetic pretensions but intriguing and compelling in its awfulness, shows how modern art has something for everyone..

At our next meeting on Thursday May 3 at 2pm in Grayshott Village Hall, Alexandra Epps will examine the role of gold in the history of art,