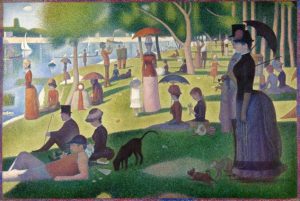 Eveline Eaton’s captivating and illuminating exploration of the development of Seurat’s highly personal art, at this month’s meeting, must surely rank as one of the highlights of our 2017 Programme.

She explained how, by the 1860’s, the Impressionists were starting to paint modern life as seen in the loose, sketchy brushwork of Renoir’s Moulin de la Galette and the bright mixed colours of Sisley’s Bridge at Villeneuve. Co-incidentally, at this time, Japanese prints were arriving in France and paint became available in tubes and so the artist could paint directly in nature, not having to mix colours in the studio. Reaction against the light hearted superficiality of the Impressionists led to the growth of symbolism. Gauguin’s Vision of the Sermon paints the idea rather than what was seen in nature while Van Gogh’s Starry Night used very expressive brushwork and bright colour to release his emotions. In 1884, against this background, the 24 year-old Seurat’s Bathers at Asnieres burst on the art world.

There is an aura of mystery about his life. His comfortable background meant he did not have to take commissions and could experiment. He had started painting at 15, and his early paintings show an appreciation of light enhanced by rendering the background with ‘comma like’ strokes while the ‘grainy’ paper was allowed to shine through in his drawings. In his compositions he returned to the ancient mathematical principle of the ‘Golden Section’. He aimed to “create something new . . an art entirely my own” – Neo-impressionism.

When he paints a forest the board is allowed to shine through giving a unity to the painting. He is concerned with geometric forms and, concentrating on the horizontals, juxtaposes them to the verticals with a vibrant foreground. Against an industrial background the people in The Bathers are relaxing by the Seine. He achieved the effect of movement in his paintings by using the Colours Theory of Primaries and Complimentaries. La Grande Jatte has more activity and inconsistencies in the scale of the figures. The dots are visible but the elongated ‘comma’ is still there. The dot, more controllable than a freehand brush stroke, acts like a scanning technique and is prominent only if one moves too near.

By 1886-87 imitation of nature was no longer considered the aim of art and in Bridge at Courbevoie the stress is on the mind not the eye. His nudes are the most calculated of all his compositions. The Circus, unfinished due to his early death at 31, points to the Art Nouveau style and shows him not just as a draughtsman but a diverse artist.