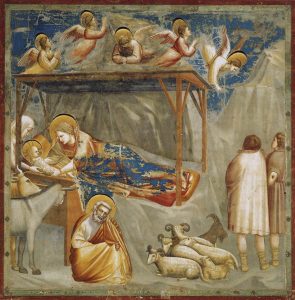 “Once Cimbae thought to hold the field as a painter; Giotto now is all the rage, dimming the lustre of the other’s fame”, wrote Dante in his Divine Comedy. The idea that Florentine art in the period before the Black Death was dominated first by Cimbae, then by Giotto and his immediate followers, such as Taddeo Gaddi and Maso di Banco (dubbed the ‘Giotteschi) is still a dominant idea in art history.

Giotto’s dramatic style revolutionised the art of monumental narrative painting although the frescoes, today considered the touchstone of his style, were not painted in Florence at all but in the Arena Chapel in Padua. However, not every significant work of art in Florence was created by Giotto and the Giotteschi or even by Florentines.

Some patrons preferred a quite different style and chose  Sienese artists and Pisan sculptors to work on prestigious projects for the Cathedral and Baptistery. The picture that emerges is complex and exciting. Florentine art developed rapidly through the dynamic inter-change of ideas between Florentines, Sienese and Pisans, competing to outdo each other.