(Note – we do not yet have a confirmed date for this tour, originally scheduled for May 2020, as it is dependent on developments with the pandemic, but we will have priority once the Purcell Club are able to mount tours again.)

We expect this to be a very special evening – and one for which we have been on the waiting list for four years because it is so popular! On only ten Saturday evenings each year, the Purcell Club lead a musical tour of Westminster Abbey. Coach from Grayshott. 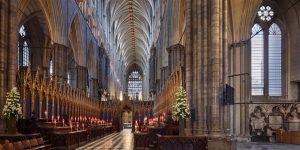 The Purcell club, founded in 1927, is named after Henry Purcell, the famous composer, who was organist of Westminster Abbey from 1679 to 1695. It is a male voice choir formed by members of the Westminster Abbey Old Choristers’ Association. The singers give their services in order to put on these tours and all profits from ticket sales go to support the Abbey and a range of small charities. 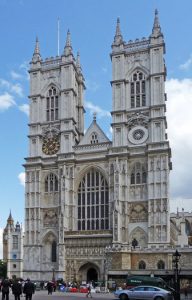 We will hear about the history and architecture of the Abbey in some detail,  moving from one location of interest to the next. At various points there will be a pause for the Purcell Club to sing suitable musical pieces ranging from the 16th to 21st centuries. On returning to the Nave for the final part of the tour, a short piece will be played by one of the Abbey organists to demonstrate the Abbey’s magnificent organ. The tour ends with the choir singing a piece of suitable solemnity around the Unknown Warrior’s Grave as the lights dim.

Our coach will leave Grayshott at 15.15 pm to take us to Westminster Abbey, where we will first have a buffet dinner in the Cellerarium, within the Abbey Cloisters. At 18.45 we will go into the Abbey for our tour. This is expected to finish around 21.15, allowing us to get back to Grayshott by c23.15.