In his time acclaimed as a scientist, philosopher, architect, inventor and artist this year marks the 500thAnniversary of his death. The queues for the National Gallery’s 2012 exhibition, testify to the excitement his work provokes and his special place as one of the greatest painters of all time. At this month’s meeting, Paula Nuttall treated us to a fascinating insight into his career and achievements. It was amazing to learn that less than 20 of his paintings exist and many are in a terrible condition, need restoration or even, have been ‘chopped about’! 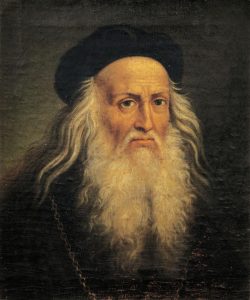 Born in 1452 out of wedlock, close to the town of Vinci, to a lawyer father, he grew up on his father’s family estate. He was apprenticed to the Florentine painter and sculptor, Verrocchio. From him, Leonardo learned how to do numerous drawings as the foundation of artistic practice. His master had great skill in showing human form, painting drapery and the effect of light and shade. Leonardo would become an incredibly inventive designer of figures and how they relate to each other. The angel in Verrocchio’s Baptism of Christin the Uffizi, is attributed to him. The way he painted his first commission, the Adoration of the Magifor a Florence monastery, was unprecedented. From simple outlines he built up tone in a monochrome way, later adding glazes of colour. However, he moved to Milan and typically, the work was not finished. This tonal build up of the figures underlies his Virgin of the Rocks. It seems he sold this privately and painted another later to fulfil the commission.

His portrait of the Milanese Duke’s mistress, Lady with an Ermineshows his interest in physiognomy and movement. She is alert, lifelike, almost full face with her body one-way, her head another and with an enigmatic smile. In his Last Supperhe experimented with new fresco techniques. With Jesus at the centre of the13 people at the table, it shows his design skills and the interaction of each group of three disciples brings drama and dynamism. It has been ravaged by Milan’s damp climate, the creation of a doorway in that wall and WW11 bombing. When the French invasion deposed the Duke, he returned to Florence.

His cartoon for The Virgin and Childwith St Annereveals a pyramid design, an unusual position of Mary in her mother’s lap, the lamb foreshadowing Jesus’sacrifice and St Anne looking on with that benign gaze.

Other artists left drawings of his fresco for the Town Hall ceiling, The Battle ofAnghiari, later covered over by Vasari. Until Leonardo no one had produced such complex compositions with interlocking, intertwining figures giving movement, Facial expressions fascinated him. Younger artists like Raphael looked to him for inspiration. Always curious, he wrote copious notes. Relative to the few finished paintings, lots of drawings exist. As a slow perfectionist, with an extraordinary ‘modern’ way of painting, this was the exciting part of the work for him. Begun in 1502 the Mona Lisa 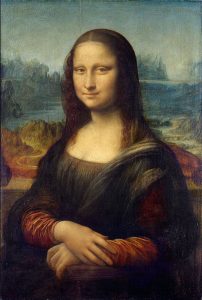 was not quite finished and never delivered to her husband, a Florentine silk merchant. Her twisting, animated pose, play of a smile, the modelling of light and shade, her arm resting on the chair arm, the wrinkles in her sleeve and the landscape vista background, are all stunningly observed. He took it with him when he returned to Milan and later to France where he died in 1519.

At our next meeting on Thursday March 7,at 2pm in Grayshott Village Hall, Roger Rosewell’s focus is ‘The Splendour and Sorrow of Medieval Stained Glass’.