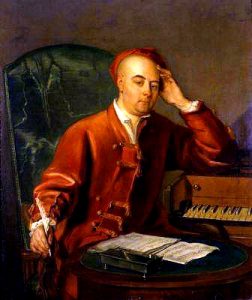 Handel’s music had a direct effect on his musical contemporaries but also on the literary, – visual and decorative arts as well – both in his lifetime and after his death.

Despite his German birth and his Italian musical training, Handel remains one of the most important composers that England ever nurtured. Not only did his music have direct influence on his contemporaries in the world of music but his larger-than-life personality had a profound effect on the literary, visual and decorative arts as well – both in his lifetime and after his death in 1759. By exploring the works of the French sculptor Roubiliac, the paintings of Hudson and Denner, the Vauxhall Pleasure Gardens, the novels of Samuel Butler, the Crystal Palace, the chimes of Westminster, as well as compositions by Sullivan and Tippett, the lecture assesses the cultural influences Handel had on a nation “from whom I have received so generous a protection”.
Music performed may include:
‘Handel in the Strand’ – P. Grainger, ‘Tune your Harps’ from Esther – G. F. Handel, ‘My Voice Shalt Thou Hear Betimes, O Lord’ – J. Corfe, ‘This Helmet I Suppose was Meant to Ward off Blows’ from Princess Ida – A. S. Sullivan.