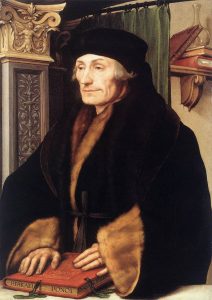 Hans Holbein the Younger (1497-1543) Portraitist of the Rennaisance by Jane Choy-Thurlow.

One of the highlights of our society’s visit to Holland was our time at the Mauritshaus in The Hague where Jane Choy-Thurlow was our excellent guide. We were very pleased when she accepted an invitation to speak at our society.

Surprisingly, we know little of Holbein’s early life in Augsburg and assume he was born in 1497/8. After moving to Basie, he designed stained glass, painted religious works and probably started his first portrait. Critically he met Erasmus and made illustrations in the margin of ‘In Praise of Folly ‘. His portrait of Erasmus, with the light falling on the head and the hand, symbolizing the latter as the instrument of the intellect, showed his ability to comment on a sitter’s persona. With letters of introduction from Erasmus he arrived in England and stayed with Sir Thomas More. 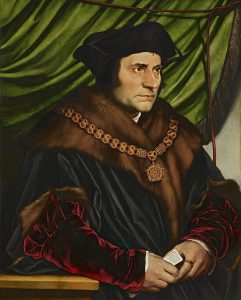 For his early portraits, Holbein began with a quick sketch in coloured chalky, punched holes in an overlay and then shook charcoal over it. Holbein’s portrait of More portrayed a retiring scho]ar who took the highest office – as in Utopia ‘, a man of contrasts. The painting of More’s family has not survived but, showing the family in an informal setting, represented a landmark in group-portraiture in Northern Europe. Whether Holbein was a supporter of the reformers, an opportunist or simply adjusted to new patrons is unclear. The Ambassadors’ reflects the contemporary upheavals with different times shown, a broken lute string, a book open at division and especially the skull that is distorted unless viewed from the right. Did his portrait of Thomas Cromwell show a hard-working servant of the king or was it ‘a most viciously, mocking painting’ (Erickson)? 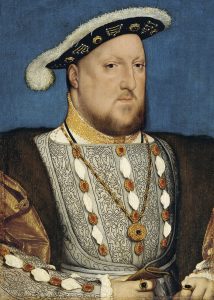 By now his portraits required only a short sitting. He would make a quick sketch, concentrating on the face, have notes and then lay the sketch over another piece of paper with charcoal underneath. Without the earlier reliance on holes, the tracings could be reused several times. His portrait of Henry showed a larger than life figure with sly eyes – every inch ‘the old fox ‘ described by the French Ambassador. His painting of Henry’s family gives an image of an enduring Tudor Dynasty and Henry’s physically intimidating stance portrays sheer immoveable power. 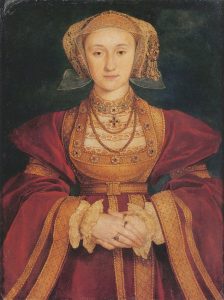 In the Anne of Cleves portrait, did he flatter her, shown drenched in jewels, or did Henry misread it? He died in 1543. A master at reading and identifying traits in his sitters he left us a unique visual record of that time.