Unfortunately, the work of Charles Rennie Mackintosh has made headlines this year, for the wrong reason. The fire at the Glasgow School of Art in June, just as its restoration after the 2014 fire was nearing completion, ravaged the building.

2018 is the 150thAnniversary of his birth in Glasgow. Anthea Streeter explained that, before leaving school at 15, he learned not just classics but engineering and science. While apprenticed, he took evening classes at Glasgow School of Art, studying Physics, Chemistry and History of Art. His design for a public hall won the Thomson Travelling Studentship. Choosing Italy, he saw the exuberance of colour in Orvieto, so different to Scottish churches and from Ravenna came his later designs for halos. Returning to work at Honeyman & Keppie, he and his friend Herbert MacNair met the MacDonald sisters at the School of Art and in1900 he married Margaret.  Her fluid floral style would often combine with his more linear designs. 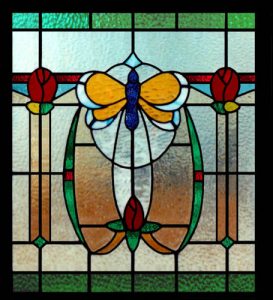 The end of the C19th saw a reaction to materialism and ornamentation reflecting the owners’ wealth. This coincided with Mackintosh’s admiration of Japanese art where space was an element in design, the linear form was important and heraldic symbols (Kamons) were incorporated. This was also the time when Miss Kate Cranston became a patron of Mackintosh and chose him to design her four tearooms in Glasgow. For the Willow Tea Rooms he designed everything from the cutlery and menu cards to the waitresses’ uniforms.

His design for the new Glasgow School of Art remains his major contribution to Western architecture. Moving away from the symmetry of classicism, the building is designed from the inside out and its front has lots of curves. With no columns, it was medieval with its beamed Library roof and Main Hall on its first floor, but, being electrified and centrally heated had the latest technology and yet the tower and arrow slit windows looked to the Scottish vernacular.

In 1900 he and Margaret were invited to the Secession Building where the best work of foreign artists was brought to Vienna. This exhibition established him as a European architect. His Rose Boudoir design for the 1902 Turin Exhibition was considered sensational and Turin awarded him the Diploma of Honour. For the publisher Blackie, The Hill House combined the Scottish vernacular solidity and roughcast walls with the different shaped windows of the English Arts and Crafts and with light fittings reminiscent of Japan. He aimed to achieve a whole world of art where everything was integrated and worked together. His own home, painted white, had none of theheavily patterned carpets, wallpaper and heavy furniture of Edwardian England. 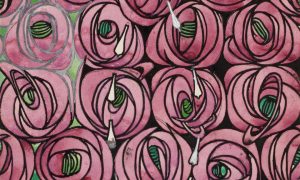 Still not given the credit he felt his work deserved, he turned to his painting and drink. In 1914 he left Glasgow for Suffolk and then London. His only commission was to design a house, 78 Derngate, in Northampton for a young couplebefore moving to the South of France where, in his last years, he continued with his watercolours. He developed cancer and died in London in 1928.

At our next meeting, on Thursday December 6 at 2pm in Grayshott Village Hall, Peter Medhurst will explore the wealth of music, traditions and legends connected to the ‘Twelve days of Christmas’.