At our first meeting after the summer break, Julia Musgrave explored the life and work of Michelangelo Merisi da Caravaggio and asked whether the dramatic lighting and intense naturalism of his work was inspired by his violent spirit or the violence of his times.

Before his birth in 1571, the Reformation and Counter Reformation had torn Europe apart. This was reflected in the changing way art told religious stories. In largely Protestant Northern Europe, artists lost a lot of their Church patrons while in Catholic countries art was often a status symbol bought by wealthy members of the church. Baroque Classicism was about beauty and meditation on Biblical scenes whereas Baroque Realism sought to show how ordinary people related to those stories. 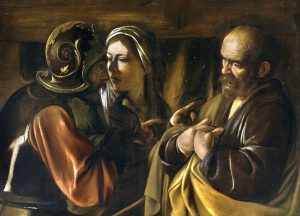 At 13 he was apprenticed to an artist in Milan and at 21 moved to Rome. After the Sack of Rome, 600 artists were involved in the rebuilding. At 21 he was painting flowers and fruit. By the 1590’s he was painting to sell on the open market rather than for patrons and depicting a more sordid side of life as in The Fortune Tellerand The Cardsharps. Preferring realistic depictions of his subjects rather than Baroque Classicism or Mannerism he did not idealize his subjects but rather showed their defects. His work showed an intense observation and a dramatic use of light. He did not make sketches first. On the first day he would mark on the canvas where a figure was and next day the models would return and pose for the painting thus making them the biggest    expense. 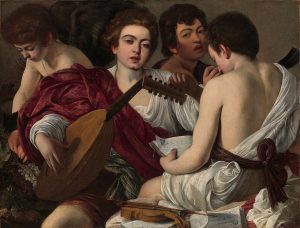 Cardinal Del Monte, a noted patron of the arts, ordered works such as The Musicians, The Lute Player and Boy Bitten by a Lizard and lots of commissions followed. His first religious paintings increased his standing and 1599 saw his first commission for the Church. Two works for San Luigi del Francesci were such a success he was assured of further commissions. Each new painting increased his popularity but some were rejected and the original repainted as it was seen as too realistic or even vulgar. The Death of the Virgin was removed from a church because it did not conform to doctrine on the Assumption of Mary and was bought privately at a bargain price before being acquired by Charles 1. 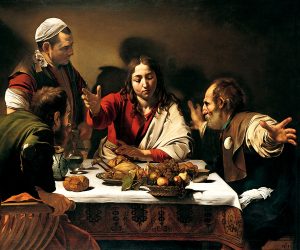 Police records reveal Carravaggio brawling, illegally carrying a sword and his problems with anger management.  In 1603-1606 with nowhere to live, his personal life disintegrated. He killed a young man, escaped to Naples and established his reputation there with more church commissions. He moved to Malta hoping perhaps that the Knights would obtain his pardon for the murder. However, a brawl led to his arrest. He escaped to Sicily and obtained commissions but feeling unsafe returned to Naples. Hoping for a pardon he set sail for Rome but died of fever en route. Rubens and Rembrandt were only two of the great artists influenced by the genius of his art.

At next month’s meeting, on Thursday October 3 at 2pm in Grayshott Village Hall, Tony Rawlins will reveal how the advertising industry exploited Fine Art.