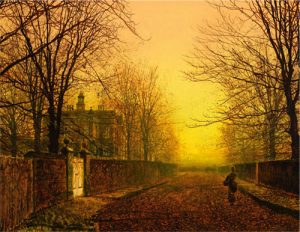 Ideas of the sacred and divine, of power and status and of love and obsession are embedded in our appreciation of gold. However, as Alexandra Epps explained at this month’s lecture, its main attraction throughout history has been how light plays on it.

The Ancient World thought their gods were made of gold. Gold in the icons of early Christianity suggested the divine. The sacred and eternal brought down by the flicker of light on the gold. The invention of gold mosaic where gold was inserted between two pieces of glass and placed at an angle on a wall, intensified this reflection of light. In his Early Renaissance frescoes, Giotto started to use gold in a different way and three dimensional modelling and increased naturalism, gave a sense of emotion. He used blue which was more expensive than gold to suggest the celestial and divine. The Virgin Mary was usually clothed in blue. Blue brought a sense of space, of a reality to identify with more easily. In the Wilton Diptych, with its complicated mix of religious and secular imagery, Richard 11 is presented to the Virgin and Child suggesting God had ordained him. The highly burnished gleam, from the impact of light, makes its message unequivocal. 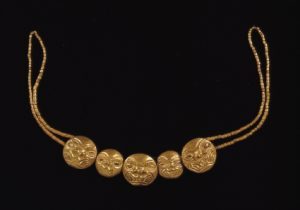 Lots of ideas are embedded in Altar Pieces. In the three parts of Frau Angelico’sAnnunciation the ray of gold in the outside scene suggests the hand of God while the dove in the beam, Gabriel’s hair and his and Mary’s blue clothing, all enforce the sense of the divine and the Trinity. Similarly gold used in Illuminated Manuscripts symbolized the divine. Botticelli trained as a goldsmith. In his The Birth of Venus the scale of the figures is at odds with the landscape. To stand in that position would be impossible in reality and the fine detail of the gold in the roses, wings, hair and the wind reminds us of the impossibility of perfection. It works on a mystical, religious and political level. In Titian’s Danae receiving the Golden Rain Zeus, in a cloud sending the shower of gold conveyed corruption of wealth and prostitution. Manet’s Olympia with its dog symbolizing fidelity and its cat prostitution mirrors Titian’s message. Turner was fascinated with the sun while for Monet it was the glitter of sunset.

In Dutch Art gold is synonymous with money, presenting the present but a reminder of the after life. The Money Changer and His Wife has moral undertones with its scales, snuffed out candle and rosary beads next to an apple, symbol of all evil. Klimt worked with different types of gold, catching light in different ways. There seems an inner light within the canvas in The Kiss. 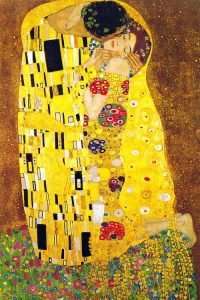 In Adele Block gold is used as an expression of wealth. Henry’s marquee at the Field of the Cloth of Gold was a supreme example of wealth and emphasized gold as the preserve of royalty. His Break with Rome ended religious painting in England and the monarchy became the centrepiece. Gold in the Coronation portrait of Elizabeth, her styling as the Virgin Queen and Victoria shown receiving communion at her coronation in a priest-like robe, all suggest they had been ordained by God. The Weather Project at Tate Modern put people back in touch with the awe early peoples felt with each sunrise. Gold and sun together illuminate how gold beckons to us in so many ways.

At our next meeting, on Thursday June 7 at 2pm in Grayshott Village Hall, Colin Davies will explore the life and work of Zaha Hadid –Architectural Superstar.