Everyone has heard and heard of Big Ben but very few members of the public have been inside the tower. However, at this month’s meeting, Tim Redmond took us on a virtual tour, up the 334 steps to behind the clock faces to learn about the workings of the mechanism before meeting Big Ben itself. 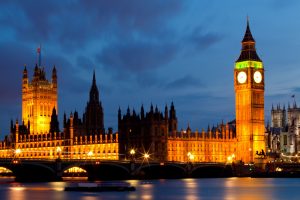 Built on the site of an old royal palace, the current Palace of Westminster replaces the one destroyed by fire in 1834. Given a number and then choosing a symbol, architects competed anonymously to design the replacement. Charles Barrie’s number 61, with its portcullis symbol won. Barrie’s style tended to the classical but Parliament wanted a gothic style building and so Augustus Pugin was enlisted. An aura of mystery shrouded the erection of the towers. Instead of scaffolding there was an hydraulic lift on the inside. The King’s tower, to the south of parliament, was renamed to mark Queen Victoria’s 1897 Diamond Jubilee. To mark our Queen’s Jubilee, the Great Clock Tower, to the north of Parliament was renamed the Elizabeth Tower. It is a cast iron structure encased in Yorkshire stone to create an ornate exterior. The deteriorating stonework was a main reason for starting renovation.

A cantilever spiral staircase leads up to behind the clock faces. Accuracy to within one second of time was one of the conditions in the competition to design the clock. Edward Dent, working with Edmund Beckett Denison achieved this. The 14ft minute hands move every two seconds and, on average, it is adjusted two to three times a month. The clock framework is cast iron. When restoration is complete, the hours, hands and background will be in the original Prussian Blue, replacing the current black. The inscription is in 23.5 gold leaf as this is more resistant to pollution than paint. 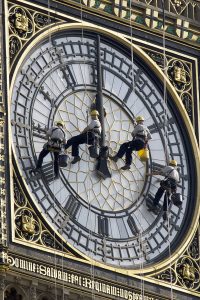 The bell for the tower was to be no more than 14 tons and have a pitch of E Natural. The first bell cracked when the size of the hammer was increased, attempting to achieve thatpitch. The broken bell was melted down and recast to just under 14tons at the Whitechapel Bell Foundry. 8 men took 32 hours to haul it up the tower to be first struck in 1859. The vibrations from that strike went around the bell and where they met it cracked again though not as seriously. The hammer size was reduced and the bell revolved so the hammer hit a different location. The four chime bells were cast at John Warner’s. They and Big Ben are wound electrically. However, the clock is still wound up manually.

There are at least two theories as to the name Big Ben. It may be called after the first Commissioner of Works, Sir Benjamin Bell whose name was around the base of the first bell or it may be after the nickname of the contemporary boxer Benjamin Grant. The Ayrton Light, the signal light toshow parliament is sitting, was originally lit by gas. Prior to 2009 this was the same for the Union flag that now flies permanently. Barrie wanted the Victoria Tower to be the main focus but, Pugin’s clock faces were so big, Big Ben’s tower had to be taller than Barrie intended.

At our next meeting on Thursday February 7, at 2pm in Grayshott Village Hall, Paula Nuttall will examine the career and works of ‘Leonardo, The Painter’.