We were doubly fortunate to set off on such a sunny day and once again, to have as our coach driver, Krzsztof who had been our driver in Amsterdam the previous year. After stopping en route for coffee we reached Oxburgh Hall, our first destination, by lunchtime. Oxburgh is a fully moated Tudor manor house and it looked wonderfully romantic in the sunshine. Like many houses, it has been extended and changed over time with the Great Tudor Gatehouse, reminiscent of Hampton Court Palace, being the oldest part. It contains bedrooms supposedly stayed in by Henry V11 and his Queen, Elizabeth of York and there was a great view from its roof. We admired one of the house’s special treasures, the famous needlework by Mary, Queen of  Scots and Elizabeth of Hardwick, wife of Mary’s ‘gaoler’ during her long imprisonment there.

Norwich was our base for the tour and the Maids Head Hotel,reputedly the oldest continuously operating hotel in England, was well located , close to the cathedral. We were well looked after there even though we didn’t quite get the cuisine that earned the hotel 2 AA rosettes recently. 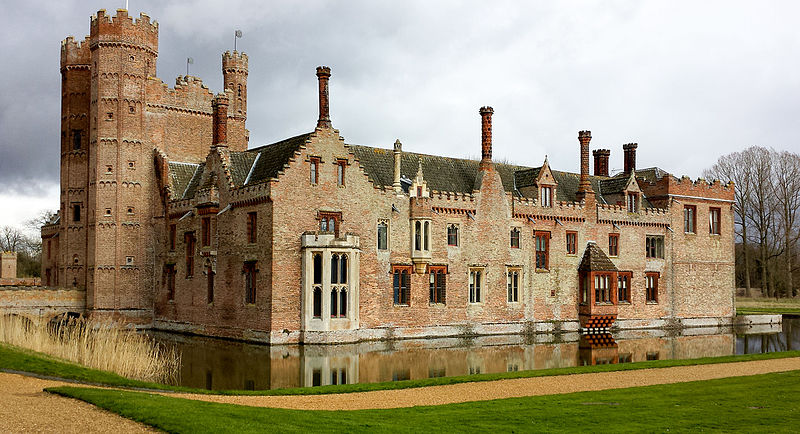 Next day promised to be a busy day with Sandringham and Holkham Hall both on the agenda.  The extensive gardens at Sandringham were a delight, with rhodendrons and azaleas in profusion and much else to see before and after our tour of the house. There was a lightness and informality about the the house, even with its grand setting and many priceles ceramics, paintings and other objet d’art. Royal photographs and other memorabilia were everywhere and the knowledgeable room guides explained where the Royal Family habitually gather at different times of day; so it was easy to see the house as a real home not a museum. However, there is a museum in the former stables and coach house. It’s surprisingly large and interesting, ranging from a large collection of royal vehicles of all types to gifts given to the Queen and her predecessors.

We could probably have spent all day at Sandringham but after lunch, it was time to leave for the contrasting grandeur of Holkham Hall, home to the Earls of Leicester. After the pleasant sunshine at Sandringham, approaching down a long drive through the parkland, our first impression of an austere house was accentuated by the grey sky and chi 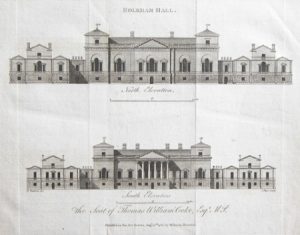 lly wind by now blowing in from the North Sea.  What a contrast the interior proved. Our expert guide took us through one magnificent room after another. It’s hard to isolate one highlight because there were so many and all enjoyed with the advantage of being a private booking.  The enormous Marble Hall, actually pink alabaster, with its coffered ceiling modelled on the Partheon was a stunning introduction while the libraries, the superb art and sculpture collections and an unusual cicular extending dining table all vied for that accolade. The game of cricket being played in the grounds, enhanced our memory of Holkham as we relaxed on the journey back to Norwich.

In the evening, about half our group repaired to a nearby Italian restaurant while the others sampled various different cuisines. A convivial time was had by all. Undaunted by the intermittent drizzle the next day, we spent the morning exploring Norwich. Our Blue Badge Guide who had joined us on the coach the previous day, came into her own on a City walking tour.. She introduced us to all sorts of mediaeval Norwich’s nooks and crannies. Before lunch, we had time to admire the soaring vaulted roof, stained glass and medieval cloisters of the Cathedral.

Our coach then took us to Blickling Hall. Once the birthplace of Anne Boleyn, the present Hall dates from the reign of James 1. Despite the drizzle, the Hall and its beautiful gardens were a splendid sight while inside the magnificence of the rooms and furniture was enhanced by costumed characters and a cookery demonstration in the kitchen. The Long Library with its amazing ceiling and major collection of books and manuscripts was particulraly impressive and the view outside, of the wisteria in full blossom and the banks of azaleas, especially captured the eye.

Some of our party had elected to spend the morning at the Sainsbury Art Centre on the University of East Anglia’s campus where there was a special Giacometti Exhibition. In the final gallery, visitors were invited to make a five minute sketch of where they had come from. Hester Whittle did a quick sketch of Headley Down’s St Francis Church. It’s a delight to report that she later heard it had been voted Drawing of the Week and placed on the centre’s website. Well done, Hester!

In the evening, we joined together for drinks and an enjoyable Gala Dinner in the hotel’s restaurant. Next morning, we bade farewell to Norwich and headed to Cambridge. Our excellent guides there, Rosie and Mike, led us on a two hour walk round some of the city’s highlights. We were fascinated, if bamboozled, by the new Corpus Clock which has no hands or numbers but tells the time (to those who understand), by flashing blue lights darting round the clock face at different rates. It is aptly described by Corpus Christi College, to which it was given, as ‘both hypnotically beautiful and deeply disturbing’.

No visit to Cambridge would be complete without including Kings College Chapel, that masterpiece of late Perpendicular Gothic architecrture with its great windows, beautifully intricate fan vaulting, the largest in the world and the ‘Adoration of the Magi’ by Rubens above the altar. Currently the organ is being restored and so we were privileged to see many of the organ pipes, some truly enormous, laid out on the floor prior to being re-installed. Rosie told us that some of the organ’s 4000 pipes are as small as a pencil.

After this uplifting visit and, by now in warm sunshine, we chose various venues for lunch before rejoining Kris for our homeward coach journey. This provided the ideal time to reflect on all we had seen and the great camaraderie and fun we had had together.