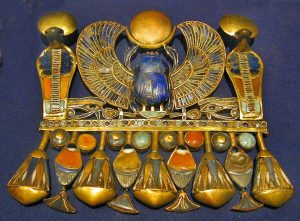 Who was Tutankhamun – The Boy King Behind the Greatest Treasures Ever Found by Anthony Russell.

Through five thousand years of history the name of one, apparently insignificant, boy stands out in Egyptian History above all others; but who really was he?  Hieroglyphics have only comparatively recently been rediscovered, opening up so much meaning from the desert sands.  This lecture puts Tutankhamun in the context of Egyptian Civilisation, considers all that is known about him and the great legacy of his discovery.  It also tells the remarkable story of that discovery in 1922 and illustrates many of the most fabulous finds in what was perhaps history’s greatest hoard.  However, it also asks when is it appropriate to dig up the remains of the deceased and what really has been learned from so much research.  It is hard for the modern mind to conceive such apparent faith and commitment and perhaps equally hard to resist “dissecting” everything to find some “inner truth”.  What was actually found is here revealed.

Anthony Russell is a cultural historian, writer and artist.  He has travelled much of the world combining painting with tour lecturing.  Now based in London, he spends much of his time lecturing and undertaking research.  At the British Museum, where he runs outreach events and hosts visiting lecturers, he has been described as “Hugh Grant meets the Dalai Lama”.

He is author of the book “Evolving the Spirit – From Democracy to Peace“, commended by Aung San Suu Kyi, as meaning a great deal to her.

I am sure many of you will remember Anthony’s incredible lecture “The Power and Glory of our Country Houses” which he delivered so brilliantly, without the support of any slides as a result of a total power failure in the village, about five minutes into his lecture.