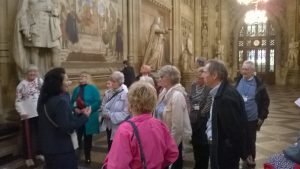 Undeterred by a wet start to the day, 46 members and guests turned out for our visit to The Seats of Power – the Palace of Westminster, incorporating the Houses of Parliament, and the Supreme Court, appropriately facing each other on either side of Parliament Square. The traffic gods favoured us for once and our coach got us to London in record time. Dividing into two groups for our tours, we had plenty of time for a relaxed cup of coffee beforehand.

Not surprisingly security was very tight in both venues and we had to pass through full airport-style security. In the event we weren’t ask to show the photo ID that we had all meticulously brought along, though one of the security staff told me that they would have required it to be shown ‘in the event of someone causing trouble’. Fortunately, we didn’t have any troublemakers amongst us!

Our Blue Badge guides in the Palace of Westminster were first class and we learnt a great deal about its history, customs, art and architecture during our hour and a half tour. We began in the great Westminster Hall, with its massive 14th C oak hammer beam roof, the largest in the world. Scene of banquets, lying in state (e.g. Churchill, Queen Elizabeth the Queen Mother), speeches (recently Mandela, Pope Benedict and Obama) and trials (not least William Wallace, Sir Thomas More, Guy Fawkes and King Charles I) – how much history has been made here! 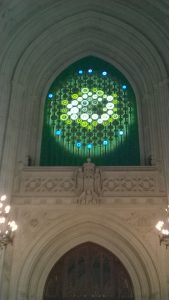 history. A beautiful new light sculpture – looking initially like a stained glass window, it’s actually made from lots of glass scrolls in metal work– commemorates  the movement that led to women getting the vote – it was opened in 2016 on the 150th anniversary of the start of the movement. Designed by Mary Branson, the glass scrolls were blown in Adam Aaronson’s Surrey workshop in West Horsley.

Going on through the frescoes and statues of St Stephen’s Hall, where Parliament used to sit until the fire of 1834, into the Houses of Parliament themselves, we marvelled at the splendid opulence of the 19th C creation of Sir Charles Barry, with much of the interior design by Augustus Pugin.  The chamber of the House of Lords, the Royal Gallery, the Queen’s Robing room and the Prince’s Chamber are all decorated from floor to roof with art and design of extraordinary, if somewhat overwhelming, complexity, none more so than the dazzling golden thrones and canopy in the Lords’ chamber.  Yet here too there has been scope for new art with depictions of the Battle of the Armada added to the Prince’s Chamber in 2010.

We were interested to see more than one depiction of Queen Victoria in her youth, as opposed to the elderly monarch we more often see, and compare them to Jenna Coleman, who holds sway as the young Victoria on our TV screens just now!

It was almost a relief to go through the frescoed corridors, past statues including Churchill and Margaret Thatcher, to the House of Commons and see the more prosaic but still lovely carved wood and green benches of the Commons’ Chamber and the voting lobbies. On the way we noted the dent made by Black Rod on the door when he strikes it to gain entrance to summon MPs to hear the Queens Speech.

Across the square in the Supreme Court our guide there spoke to us knowledgeably (if a bit too rapidly) about the building and the work of the court. Completed in 1913, the grade II listed neo-Gothic building was originally the home of Middlesex County Council. When that was abolished it became a Crown court until it was taken over and restored when the Supreme Court was created in 2005. 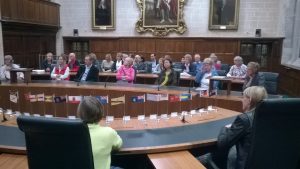 We saw the three court rooms and the impressive and lovely library. The court can hear civil cases from all parts of the UK, but not Scottish criminal cases, where the highest court remains in Scotland. Issues about the constitution and about devolution, such as the case at the end of 2016 concerning legislation for Brexit, are considered by the Court. Interestingly, it is also the Supreme Court for a range of Commonwealth countries. There are 12 justices, with an odd number hearing each case, usually 5 or 7 but for the Brexit case 11.

We were intrigued by the emblem chosen by the court and to be found woven into all the carpets – the symbols of the four countries of the UK – rose, thistle, leek and a (perhaps less commonly seen elsewhere) flax flower for Northern Ireland.

Safely negotiating the Friday night traffic, our excellent coach driver got us back to Grayshott right on time at 6 o’clock to round off a really good day.

Photos from the event can be found in the Photo Gallery