Jane Choy-Thurlow gave over 200 people from Grayshott, New Milton and Alton art societies a fascinating and well-presented virtual tour by zoom of works from the Golden Age of Dutch Art in the Mauritshuis. Known as a little jewel in the Hague in the Netherlands, the Mauritshuis is considered to be the greatest of the small museums and one of the top four museums for Dutch Art in the world. The house itself was built between 1636 and 1641 in the Dutch classicist style by Prince John Maurice. It was opened as an art gallery in 1774.

Jane took us on a virtual conducted tour of the various rooms dedicated to individual styles of Dutch art. One of the advantages of such a tour was that we could have very close up views of the various paintings so that Jane was able to show us great detail and explain the style and significance of each work, with her great expertise and also a quiet sense of humour.

After admiring the Lamentation of Christ by Rogier Van de Weyden, amongst the other works we first saw were Still life with Cheeses by Clara Peeters – the significance of only having one dairy product at a time signified temperance and moderation!  Clara put her signature on the knife handle and even a tiny self-portrait as a reflection on a pewter jug. The Garden of Eden with the Fall of Man was the combined work, in two different styles, of Peter Paul Rubens and Jan Brueghel, who both signed the painting. The monkey portrayed the weakness of man and the cat the crafty nature of women!  We also saw Fun on the Ice by Hendrick Avercamp, which gave us a wonderful idea of life on a frozen canal. The artist was a deaf mute so painting enabled him to express what he saw.

We then viewed a modern ceiling with an abstract impressionist painting which was completed in 1987. Demonstrating vanity and pride, it depicts Icarus. Jane then continued with explaining the significance of a dragon fly in a still life by Ambrosius Bosschaert called a Vase of Flowers in a Window, showing transient life

as some flowers were out of season and beginning to wilt and a Calvanistic symbol. We moved on to Frans Hals’ delightful portrait of a Laughing Boy.  Also by Hals we saw marriage portraits of a couple and we admired the detail in the lace ruffs and ‘27 shades of black’ in their garments. We saw a very touching scene of Dutch life with a young mother with her baby in a cradle – The Young Mother by Gerard Dou, who had been a student of Rembrandt. It was almost like a photograph of its time and showed the use of light, for which Rembrandt is renowned.

No visit to Dutch art would be complete without admiring Rembrandt’s own works: we saw The Anatomy Lesson of Doctor Tulp which he painted early on in his career – Jane explained in detail the dramatic action of dissection. Another work by Rembrandt was Simeon’s Song of Praise from the Book of Proverbs and a Self Portrait which demonstrated his use of thick paint and a much looser style that was almost an early form of impressionism.

We admired the famous painting of The Bull by Paulus Potter, which on close inspection was a composite bull who had an old neck and younger hind quarters, a fact we probably would not have noticed without Jane’s expert explanation. We saw the charming picture of The Goldfinch chained to its perch by Carel Fabritus, who 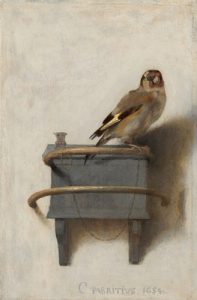 had also probably trained under Rembrandt. A CT scan showed indentations on the canvas which were probably the result of an explosion in the studio. We concluded our tour with Johannes Vermeer’s enchanting View from Delft and his famous Girl with a Pearl Earring. On close inspection the earring is probably not pearl but silver. Jane showed us how the painting had been restored recently, which made a very interesting conclusion to our tour.

I have only described a fraction of the works we had explained to us in depth by such a knowledgeable guide and wetted our appetites for when we can visit the museum again. Jane added to the fascination of our trip by ending by playing music from the scores shown on two paintings. We cannot thank Jane enough for such a stimulating virtual tour.