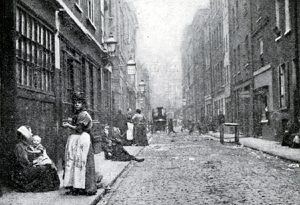 For this tour using Zoom technology, we were joined by members from the Arts Societies at Alton and New Milton, so that there was a combined audience of around 200.

Pepe Martinez, a leading London Blue Badge Guide, took us on a virtual walking tour of the Old East End.  We started at Liverpool Street Station, just over the border from the City of  London, which was opened in the 1870’s and from a photo taken in 1920’s we could appreciate the grandeur of the  building and identify

the original pillars still standing today.  The monument to the children of the Kinder Transport was pointed out which commemorated around 10,000 children evacuated from Europe by Nicholas Winton and brought to Britain just before the 2nd World War.

We walked up Bishopsgate, past Petticoat Lane and just off the right hand side in amongst the new buildings we were astonished to find the excavated remains of  the Charnal House from 1320 where  it is believed some 8,600 bodies were stored.  This was originally part of the site of the St. Mary, Spital Priory Hospital founded in 1197.

Other surprising excavated remains turned up underneath Spitalfields Market, which was closed in 1990 and redeveloped,  namely a coffin containing the remains of a 3rd century Roman woman with Mediterranean features.

Sandys Row Synagogue was originally built as a Huguenot church in 1767 but was taken over as a Jewish synagogue in 1867.  Jewish people came over with William the Conqueror as moneylenders but open hostility developed against them and in 1290 they were banned from the country until in 1656 Oliver Cromwell re-admitted them.  In 1881 massive populations of Jews migrated from the pogroms of  Eastern Europe  into London and  America and by 1900 there were 125,000 Jews living in the East End – many setting up their own businesses. 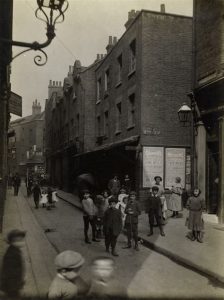 Frying Pan Alley was where Jack London from San Francisco decided to live on his arrival in 1901 in a hostel as a homeless sailor for 6 weeks.  Subsequently he published a book ‘The people of the abyss’ which describes the dreadful living conditions of the time.  Victorian philanthropist Dr. Barnado was raising money for children by photographing them in deliberately ragged clothes to stir the conscience of wealthy society.

Dorset Street was known as the worst street in London.   The homeless hostel there is now the London School of Economics.  But in 1888 it was the home of  Mary  Kelly, the last and most famous victim of Jack the Ripper.  Many of his victims frequented 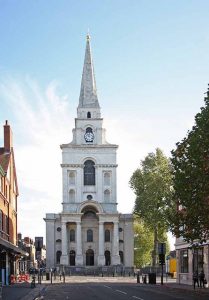 the 10 Bells Pub nearby, which is on the opposite corner to Spitalfields Christchurch built by Hawksmoor in 1720.

When the Huguenots flooded out of  France in 1685, after Louis XIV revoked  the Edict of  Nantes, they set up homes with their silk weaving businesses in Fournier Street and it became a prosperous area.  Today it is again desirable and the houses fetch very high prices.  Nearby in Princelet Street number 2 has a blue plaque commemorating Ann Maria Garworth, who came  from the north of  England in 1728 and became a notable silk weaver, whilst at number 4 the façade has been left in its original distressed state and is in great demand to hire from filmmakers.

A site of 11 acres was occupied by the Old Brewery, which was the largest in the world by 1900. 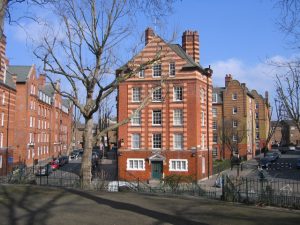 The old Nichol slum was shown on maps in the Victorian era as being very poor and containing a high criminal element.  It was demolished in the late 19C and was rebuilt as the Boundary Estate, the first example of social housing in Britain.

Our thanks go to Pepe who was an inspiring narrator and we are very much looking forward to Part 2 entitled ‘ From Bangladesh to Banksey’ on Tuesday 19 January.  Please note new time of 2.0 p.m.