Joining forces once again with our sister Societies at Alton and New Milton, we enjoyed another tour with our Blue Badge guide, Pepe Martinez, who took us from the Whitechapel Gallery via Brick Lane to the Old Street Roundabout.  The Whitechapel Gallery, designed by Charles Harrison Townsend, was opened in 1901 to much surprise at its location in a poorer part of London.  But it has been a great success – it was the first location in 1938 to display Picasso’s Guernica – and in 2009 it was extended into the adjoining library.  Crossing the road, we enter what used to be St. Mary’s park named after the site of a church which was destroyed in the bombing of the 2nd world war along with 80% of the East End.  In fact it was the fourth church to be destroyed on the site over several centuries so understandably it has never been rebuilt.  Instead the Bengali Language Monument is sited in the park and the 21st February has been officially dedicated as International Mother Tongue Day.  The park has been renamed in memory of Altab Ali who came from Bangladesh to London in 1969 at the age of 15 but who sadly died in 1978 after being attacked and stabbed by racists nearby.

East India Company records show Bengalis coming to London in the 19th century but a larger wave of migrants came after the 2nd world war and again in the early 1970’s after a war with West Pakistan ended and Bangladesh became an independent country.  The earlier post war migrants worked in factories but when these closed down in the 70’s they started opening up restaurants and there are now 57 establishments in Brick Lane alone.

Moving into Brick Lane we pass under an archway designed by Mina Thacka in a Bengali style and see the Art Deco Mayfair Cinema built in the 1930’s then converted into a Bengali cinema in 1960 but now closed.  Further up is the old Truman Brewery which used to cover 11 acres but was closed in 1989.  Fortunately it fended off supermarket developments and in 1994 the main building was bought by a wealthy family to be used as a showcase for art installations and a mixture of small businesses.  On the opposite corner a property exhibits a blue plaque commemorating Thomas Foxwell Buxton, an anti-slavery campaigner, 1786 – 1845.  The oldest Beigel Shop dates back to 1855 and there are intriguing shop fronts such as Dark Sugars, run by a Ghanian lady, which specializes in the most delicious hot chocolate and the Cereal Killer café, which was very successful before the lockdown.

In Hanbury Street we see the huge street art image of a Heron which has become a local landmark and the 2nd Home business offering an ultra-modern interior where tables are available to rent to set up a business. Also at No 29, where the body of the 2nd victim of Jack the Ripper was found, is the Kobi Nazrul Centre, named after a poet, songwriter and activist who was confirmed as National Poet of the Bangladesh nation in 1972.  The centre is dedicated to helping alleviate deprivation in Bengali speaking households.

Another turning off Brick Lane is Redchurch Street, which was recently voted the trendiest shopping street in the world.  Artists Sarah Lucas and Tracey Emin were initially looking for a studio to share but ended up opening a shop on Bethnal Green Road selling simple bits and pieces in 1993.  It became very trendy but only lasted 6 months and a party was held at its closure.  All the bits and pieces left over from the shop were pinned to a sheet and entitled the Last Party, which is now at the Tate Gallery! 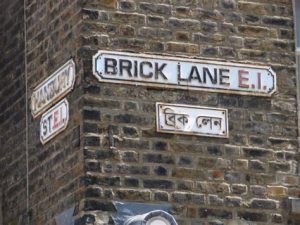 The old Victorian Christchurch School in Brick Lane, built in the 1870’s, bears 2 small statues of a girl and a boy which has been incorporated into one of the Spitalfield roundels that are dotted around the area.

We were shown many examples of street art and told the story of ‘King Robbo’ who from 1985 onwards was a prolific graffiti artist throughout the East End.  He came to blows with Banksy in a night club in 1998 and a rivalry developed between them when Banksy painted over one of his masterpieces under a bridge in 2001.  Robbo promptly restored it to his original image and Banksy painted over it again.  This ‘jousting match’ continued backwards and forwards until Robbo suffered a fall which later led to his death in 2014.  Banksy painted over his own image at the same spot and restored the original Robbo masterpiece with the addition of a candle and raised money for Robbo’s care and later for his family.  The Cargo nightclub which opened in 2001 on Rivington Street has a number of Banksy images on the walls which we were shown.

Once again we enjoyed a very entertaining and informative presentation and many thanks go to Pepe for brightening a dreary January day.