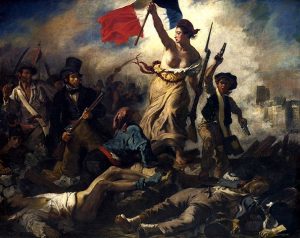 This lecture follows the separate but inter-twined lives of three leading exponents of the Romantic movement. We look at the paintings of Delacroix, discuss the music of Chopin and consider the amazing literary output of George Sand.

This should prove an interesting exploration of the lives, relationships and works of these three icons of the Romantic Movement. When Chopin first met Aurore Dudevant (George Sand) his immediate reaction found expression in the words “What an obnoxious woman!”. Two years later they became lovers. Both became synonymous with the Romantic movement and both were close friends of Delacroix the leading French Romantic painter.
In addition to exploring Delacroix’s paintings with their brilliance of colour and highly dramatic effects, Elizabeth Rumbelow will discuss the phenomenal range of Chopin’s music as well as George Sand’s amazing output of novels, plays and other writings.