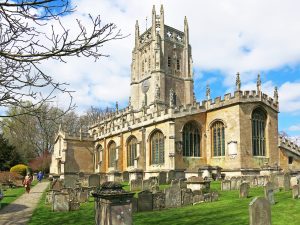 at Fairford revealing the medieval stained glass windows in their full beauty.  The church was built in the perpendicular style in the 1490’s by a local wool merchant, John Tame, retaining the tower of an earlier building.  It was rededicated in 1497 during the reign of King Henry VII and the glass was installed over the next 15 – 20 years by the king’s  glazier Barnard Flower of Westminster and probably transported via the River Thames.  We were all in awe of the vibrant colours and finely drawn details of scenes from the life of Christ and the depiction of centuries of prophets, apostles and bishops.  The piece de resistance was the enormous and magnificent West Window portraying the Last Judgement. 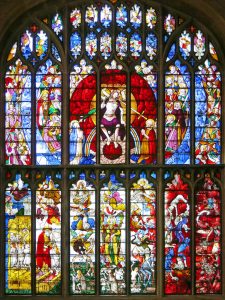 When Sir John Betjeman was asked on Desert Island Discs what he would like to have with him he replied, ‘the West Window of St. Mary’s Church at Fairford so that I might contemplate good and evil for the rest of my days’.  St. Mary’s is unique as a parish church in retaining a near complete set of medieval windows. their survival, helped no doubt, by their removal and safe storage during the civil war and again during the second world war.  It was a wonderfully inspiring visit.

We enjoyed a very pleasant lunch at The Trout Inn by the river at Lechlade and were suitably invigorated for our visit to Buscot. 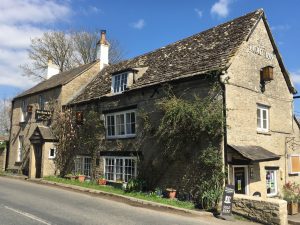 This was just as well considering the undulating grounds. Numerous avenues radiated out from the house to the east, with vistas to various sculptures, an Italianate water garden leading down to the lake, a walled garden and, slightly incongruously, a small contingent of (replica) Terracotta Warriors.  Hooray then for the secluded swinging garden where you could rock gently to and fro on one of the swinging seats and reflect on the exceptionally pristine presentation of the grounds.  Could it be that at sunrise those Warriors come to life and set about beating the gardeners into ever greater efforts to achieve perfection, before returning at midday to their stony ranks! 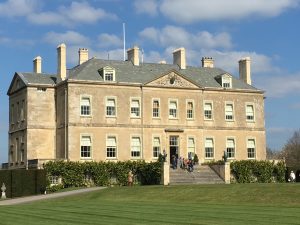 is located on a gentle rise with extensive views over the Oxfordshire countryside to the north and over those manicured ‘pleasure gardens’ to the south.  It was built between 1780 and 1783 for a local landowner and then purchased in 1889 by Alexander Henderson a successful financier who was created 1st Lord Faringdon in 1916 .  He greatly enlarged the house and commissioned Harold Peto to design the Italianate water garden.

His grandson  Gavin Henderson, the present Lord Faringdon, now lives there with his family and looks after the property on behalf of the National Trust.  The family collection of pictures, furniture, ceramics and objects d’art, known as the Faringdon Collection are displayed in the house.  The interior impresses with the same meticulous attention to detail.  The chandeliers were gorgeous and the furniture exquisite.  There were two very large black and gold torcheres  which were originally given to the Duke of Wellington by Louis Philippe, before he became king of France (1830 – 1848).  The information given just said they ‘passed’ to Lord Faringdon, rather than ‘ purchased’ or’ inherited’ and I couldn’t help wondering about that – Wellington died in 1852.

Being a great fan of the Pre-Raphaelites I particularly enjoyed Burne-Jones’s series on the Legend of the Briar Rose which extended around three sides of the saloon.  In the bedroom while gazing at Rossetti’s Pandora holding that infernal box it struck me to be a prophetic tale for our Br—-t  times.  All we can do is hope.

Our thanks go to Peter for organizing a really good trip and for laying on some good weather, as on the previous day it had poured with rain.

More photos of the visit are in our photo gallery here