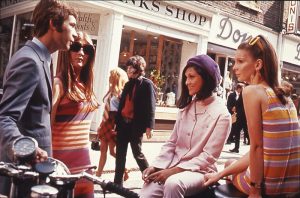 British photography enjoyed a golden age in the 1960s. Young, talented newcomers broke out of the conventional studio to revolutionise perceptions of fashion, portraiture and popular culture. This lecture looks at a range of superb images from photographers such as David Bailey, Terence Donovan, Lewis Morley, Tony Ray­Jones and Jane Bown.

His chief interests lie in photography, architecture and history and he combines all three in his lecturing career. He has taught at University College London, since 1997 and became an accredited lecturer for The Arts Society in 2003. He is a member of the Association for Historical and Fine Art Photography and an exhibition of his own photographs has been staged at UCL. In an attempt to gain a deeper understanding of the skills of some great photographers of the past, he has begun to work with a pre-War Leica camera, as used by his great hero, Henri Cartier-Bresson, and many others.