The celebration of the period following Christmas can be traced back several millennia and to at least two cultures – neither of them Christian.  One of them is the Southern Roman feast of Kalends on the 1st January and the other, the Northern Nordic Festivals of Yuletide surrounding the celebrations of the Winter solstice. However, it was Pope Julius I who decided to subvert the gluttony, drunkenness and sun worship to Christian purpose and, by choosing the 25th December, to celebrate the birth of Christ. He neatly bridged these cultures and paved the way for future Christmas festivities.  So it is that many of our modern Christmas customs and carols bear references to traditions that have nothing to do with the birth of Christ.  Nonetheless, each year, Christ’s birthday on 25th December signifies the beginning of twelve festive days of celebrations and music making.

In this lecture/recital, Peter explores the wealth of Christmas music, traditions and the curious legends that are connected with them. He also discusses the history of the celebration of the period following Christmas going back millennia. 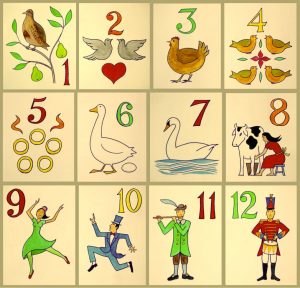 Music performed includes: Deck the Halls with Boughs of Holly, The Coventry Carol, The Twelve Days of Christmas, The Wassail Song, and The Three Kings.

Peter will need no introduction to many of our members but to those who have not been to one of his lectures/recitals before – you are in for a treat.  Peter appears in the UK and abroad as a musician and scholar, giving recitals and delivering illustrated lectures on music and the arts.  He studied singing and early keyboard instruments at the Royal College of Music and at the Mozarteum in Salzburg