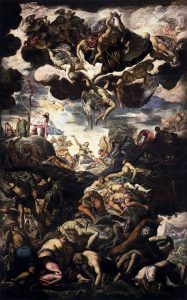 The dramatic canvases which cover the walls and ceiling of the  Scuola de San Rocco not only reflect the teachings and activities of their patrons but also greatly influenced artists including Velazquez and El Greco who praised Tintoretto’s “Crucifixion” as the “greatest painting in the World”.