Adam Busiakiewicz, Art Historian, lutenist and lecturer, currently pursuing his doctorate in Art History at Warwick University, regularly gives talks, tours and lectures at Warwick Castle, The National Gallery, The Wallace Collection and others. On 3rd September, nearly eighty members of The Art Society tuned in via Zoom to hear him give a very interesting and inspiring lecture on ‘The Queen of Instruments: The Lute within Old Masters’. 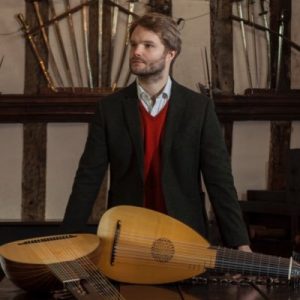 Having ancient origins in the Middle East, the lute became the primary instrument of Renaissance Europe. By the 15th Century it was so popular it started to appear in a large number of paintings and by the 16th Century, playing the lute had become the accomplishment of educated courtiers and aristocrats. Henry VIII was described as a phenomenal lutenist, a skill which the Venetians considered to be his most important attribute.

At a time when many painters were musicians too, their artwork often reflected how music and art were interwoven. During his talk, Adam coupled works of art with music and highlighted the presence of the lute and other musical references asking the question, “What does that painting sound like?” 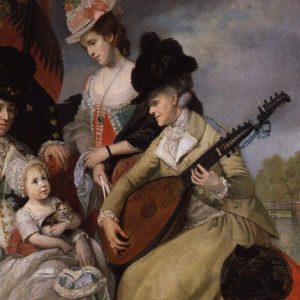 It was fascinating to view paintings whilst Adam skilfully played his lute. One of these was “A Party in the Open Air” by Isaac Oliver and Adam beautifully played three contemporary short dances to accompany it. Adam also played music written by John Dowland, whose compositions and those of many other composers of the time were often considered to be melancholic, a mood which was  considered to be very fashionable.

Adam showed examples of lutes and their beauty, with ivory panels, ebony fretwork and the “rose”, carved sound hole, looking like medieval stained glass. The lute is a relatively quiet instrument and the Italians in particular decided  that it was not loud enough for performance needs. In order to overcome this a new type of lute called a Theorbo was made.  This instrument had a very long neck and many more strings than the traditional 18 stringed lute and made much more sound.  However, it was also enormous and very difficult to transport and this meant that very few people played it. By the 18th Century the lute had gone completely out of fashion and it began to disappear. Sadly only five of the beautiful lutes made by Hans Fry, the Stradivarius of the lute world, actually survived until recent times. It is fortunate that modern instrument makers have been able to refer to the detailed images of lutes within paintings of the Renaissance when building them today.

Dolmetsch, of Haslemere,  revived Early Music in the 20th Century and this led to the lute being made again and becoming notably more fashionable.  The very popular recently deceased classical guitarist, Julian Bream  also loved and played the lute.

Adam Busiakiewicz is currently planning a publication on the Grevilles of Warwick Castle and has had articles published by the British Art Journal.