The Queen of Instruments: The Lute within Old Masters by Adam Busiakiewicz

The lute holds a special place in the history of art: painters of the Italian Renaissance depicted golden-haired angels plucking its delicate strings, evoking celestial harmony; in the sixteenth century, during the rise of humanism, the lute was a becoming pastime of educated courtiers, as depicted by the likes of Holbein and Titian; throughout the seventeenth century, the instrument continued to play a key role in emphasising the intimate, debauched and transient pleasures of interior scenes by Jan Steen and portraits by Frans Hals. This lecture looks at the lute, and other musical instruments, as devices to express various aspects of the human character throughout the ages. 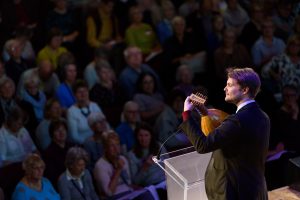 Adam Busiakiewicz is an Art Historian, lutenist and lecturer. After completing his Bachelor’s Degree in History at UCL in 2010 he held the position of Head of Historical Interpretation (curator) at Warwick Castle. He left the castle in 2013 after winning a full AHRC studentship to pursue a Master’s Degree in Fine and Decorative Art at the Sotheby’s Institute of Art, London. He is currently pursuing his doctorate in Art History at Warwick University after winning a CADRE Postgraduate Scholarship in 2017.

Earlier in December 2014 he became the youngest Guide Lecturer at the Wallace Collection, where he regularly gives talks, tours and lectures to both public and professional audiences. He has also given lectures at the National Gallery in Trafalgar Square, London, and is organising a series of talks there on the lute in paintings in 2018.

Adam is currently planning a publication on the Grevilles of Warwick Castle, and has had articles published by the British Art Journal, The Sidney Journaland Hispanic Lyra. He was also the Editor of the Georgian Group’s 80th Anniversary Exhibition catalogue entitled Splendour! Art in Living Craftsmanship (2017).