In April members were treated to a fascinating talk by Imogen Corrigan  about the Bayeux Tapestry.

At nearly 70 metres long and 50 centimetres tall the Bayeux Tapestry was made in seven sections which were eventually attached to each other. The Pictures were woven from only 10 different colours of ‘wool’ on linen and include no fancy stitching, the quality of the workmanship varying from section to section. The tapestry has not always been stored well, it was rolled up – possibly for hundreds of years and was nearly cut up during the French Revolution. Nonetheless it has survived and remains as vibrant today as it did 900 years ago.

The Tapestry is not just a narrative of the most famous battle in English history, it also depicts the events leading up to it. The images tell of the struggle for power and the claims to the throne of England, eventually leading to the Norman Conquest of England in 1066, led by William Duke of Normandy challenging Harold II, King of England and culminating in the Battle of Hastings. 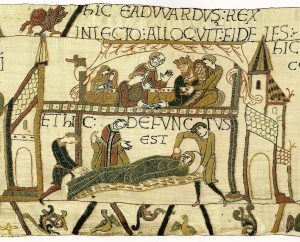 The tapestry itself is thought to date to the 11th century, within a few years after the battle. Whilst it tells the story from the point of view of the conquering Normans it is now widely accepted that it was embroidered in England. Imogen showed evidence to support this theory including details of items which were almost certainly made in England at that time. Interestingly, the last scene where the English turn in flight, was added in 1814. This could be seen as further evidence of the original workmanship being English – the English fleeing was not something to celebrate so soon after the battle and hence it was omitted when the tapestry was originally made. 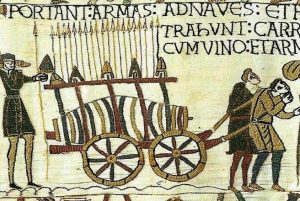 During the talk many of the scenes were examined in detail and the audience explored what can be learned from this turning point in history. It is a moral story showing that good cannot come to those who break their word. It is a story of Kings, chivalry and ambition. Intriguingly many crucial events are omitted and we can only speculate as to why.