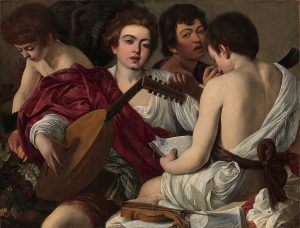 Caravaggio’s paintings inspired many artists during his lifetime and would go on to influence many more, from Orazio Gentileschi to Peter Paul Rubens, Gerard van Honthorst and Rembrandt.

Each absorbed a different aspect of his work. His style spread across Europe and gave rise to the international movement known as ‘Caravaggism’. Yet for many, Michelangelo Merisi da Caravaggio is famed as much for his art as for his criminal record. Was it the violence of his times or his own violent spirit that inspired the dramatic lighting and intense naturalism of his work? This lecture follows the dramatic incidents of the artist’s life and looks at why and how his influence spread so far.

Julia Musgrave got her first degree in Chemical Engineering and went on to become a Chartered Information Systems Engineer and IT project manager. In 2008 she decided that life was too short for just one career and decided to become an art historian.

She now has a Graduate Diploma in the History of Art from the Courtauld Institute of Art and an MLitt in ‘Art, Style and Design: Renaissance to Modernism, c.1450 – c.1930’ from the University of Glasgow. She is currently working towards her Ph.D. at the University of York the involvement of Roger Fry and the Bloomsbury Group in the development of the Contemporary Art Society from 1910 to 1937. She is a lecturer in Art History at the City Literary Institute (City Lit).